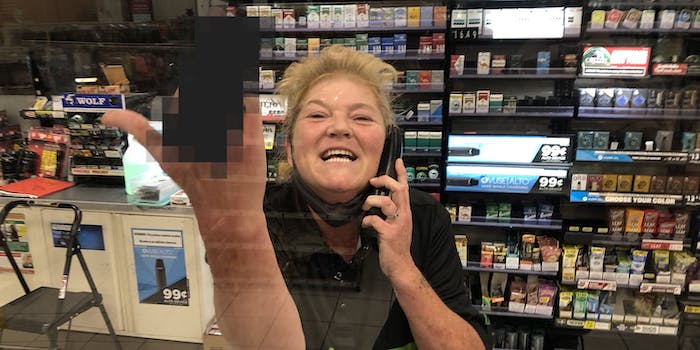 But what's the whole story?

A 7-Eleven employee dubbed a “Karen” was accused of flashing her middle finger at an at-risk customer after he asked her to wear a mask. A photo of the incident was shared on Twitter by Fox News analyst Linda Chavez.

Chavez shared a photo of a woman on the phone flashing her middle finger at the camera behind what appears to be a plastic screen.

“Employee’s response at ⁦@7eleven 2000 N Shenandoah Ave. in Front Royal VA last night when my at-risk husband complained that neither she nor customers were abiding by VA mandate on masks,” Chavez wrote in her tweet on Sunday.

The photo was also shared on the subreddit r/FuckYouKaren. Women having public meltdowns on video are often dubbed “Karens,” and in recent months, many have apparently thrown tantrums after being asked to wear masks.

Chavez did not respond to the Daily Dot’s request for comment about the context of her photo. But there might be more to the story. After the tweet went viral, users shared screenshots of a Facebook comment alleging a man was at the store cursing at two kids for not wearing a mask.

According to screenshots shared, the comment was in response to a post by one “David,” but the Daily Dot was unable to trace the post on Monday.

In the photo, the employee is seen wearing a mask under her chin.

“Your at risk husband was in the store cussing two lityle kids for not wearing a mask,” said the comment, adding that the man was allegedly calling the children “bastards and all kinds of nasty names.”

The commenter wrote that she asked the customer to leave and when he refused, she threatened to call the police.

“But first he called me fat bitches and fat wholes and assulted me its all on camera so he has assult charges coming,” she wrote. “I had my damn mask on until i tried to talk to dispatch and they couldnt understand me.”

The Daily Dot has reached out to the person who made the comment and will update the story if she responds. Her Facebook profile says that she studies in Front Royal, Virginia, the same city where the incident took place.

The profile also includes a post from a May that mocked wearing masks to prevent the spread of the coronavirus.

By Monday afternoon, people began flooding the Facebook user’s comments with photos of the 7-Eleven incident.

On Monday, 7-Eleven responded to Chavez’s post and apologized.

“We’re so sorry to hear about this incident,” 7-Eleven’s Twitter account wrote. “Could you please send us a DM with additional contact info, so we can forward to the appropriate 7-Eleven Management personnel as well as for proper follow-up with you?”

In a statement to the Daily Dot on Monday, 7-Eleven condemned the incident and said the employee “no longer works at the store.”

“7-Eleven and its franchisees comply with all local laws, including mask mandates, and respectfully ask that customers do the same,” the statement said. “We immediately investigated the situation … and learned from the independent franchisee that this employee no longer works at the store and training has been given to current employees.”