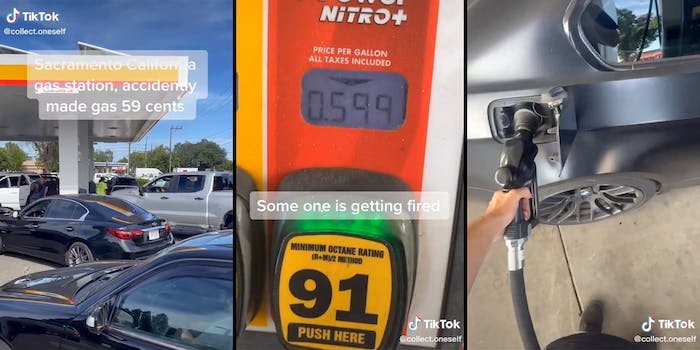 ‘Someone is getting fired’: TikToker films chaos at gas station accidentally cut price to 59 cents

'Hear me out. What if all the workers did this.'

Gas prices recently hit a record high in the United States, with the national average price hitting just over $5 per gallon last week, per the Hill.

In some states, the average is even higher: The Hill reports that while the nation was facing an average price of $5.01, Californians paid an average of $6.43, marking it as the most expensive state for gas in the country.

However, it seems that not all gas stations followed this inflated pricing. TikToker @collect.oneself recently went viral after revealing that, while other Californians were unloading their wallets at the pump, @collect.oneself was paying a cool 59 cents per gallon.

The TikTok currently has over 3.2 million views.

Last week, a Shell station in Rancho Cordova, California, made headlines after a “glitch” caused the price of gas to drop below a dollar, per CBS Sacramento.

While @collect.oneself’s video claims that the gas price was 59 cents per gallon and mainstream news outlets reported that the glitch resulted in prices of 69 cents per gallon, the station’s surroundings visible in the TikTok confirm that it is the same location and documents the same incident.

The same article reports the losses from this incident amount to over $16,000, though this number is not confirmed. Szczecina was reportedly fired as a result of the incident.

On TikTok, users shared their own thoughts on the low prices.

“Why can’t things like this happen to me,” one user wrote.

“hear me out. what if all the workers did this,” another added.

Some thought that @collect.oneself may actually be charged a higher price than they expect.

“Nah you’ll just get the real price in your bank statement,” one user speculated.

“I paid 59 cents at the pump but my bank statement says $280 .. FML,” another alleged. The Daily Dot could not confirm that customers were later charged more than they paid at the pump.

The Daily Dot reached out to @collect.oneself via Instagram direct message and to Shell via a media contact form.