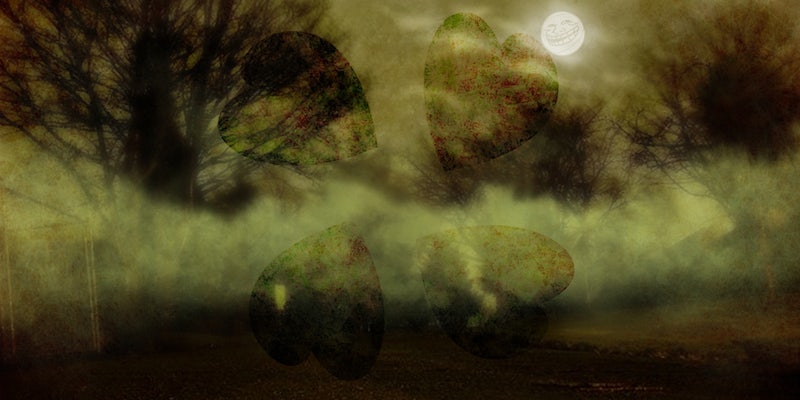 /x/ gets less attention than its rowdy cousin, /b/, but it's every bit as fascinating.

This video has been viewed hundreds of thousands of times. It means something, and 4chan’s paranormal discussion board, /x/, is going to figure out what.

For three years, a YouTube channel called Pronunciation Book built an audience with videos just like this one: minimal pieces with a repeated word or phrase, sometimes an example sentence. Most of them run for no more than 10 seconds.

But in July, Pronunciation Book went totally off the rails. It started posting one cryptic video a day, counting down from 77 until Sept. 24, 2013. /x/ members, often called “/x/philes,” were the first to notice. /x/philes are always the first to notice.

“Looks like an ARG [alternate reality game]… but god damn is that f***king clever, to subvert an established YouTube channel,” one anonymous user wrote in an early /x/ thread about the mystery. “I’ll suspend [my] disbelief and play along.”

If your experience with 4chan is limited to the racism, pornography, and trolling antics of the infamous /b/ board, what happens on /x/ may come as a surprise. And it may just make you a believer.

/x/ isn’t the 4chan the Internet has grown to despise and gawk at.

4chan’s best-known imageboard, /b/, is essentially the Dr. Jekyll and Mr. Hyde of the Web. It’s capable of doing great things (like bringing a kitten-kicking teen to justice) and the unthinkable (like flooding a Facebook remembrance page for a dead teenager with hateful messages) all in the same month.

These shenanigans have made /b/ a regular fixture in the media over the past nine years. It’s become so ubiquitous that “4chan” is often used as a synonym for “/b/,” as if the site’s 63 other boards—focusing on topics like gay and lesbian life (/lgbt/), fitness (/fit/), or automobiles (/o/)—simply don’t exist.

But while the trolls of /b/ bask in the spotlight, /x/ has always thrived in the shadows, conducting fascinating, obsessive investigations of the paranormal with relatively little attention from the outside.

/x/ launched in January 2005 as 4chan’s general photo board. In February 2007, 4chan founder Chris ‘moot’ Poole repurposed it as a paranormal-themed board after noticing the success of the paranormal board on 7chan, a 4chan spinoff.

/x/’s popularity spiked in May of that year, thanks to 4chan’s video game community, /v/. At the time, /v/ was teeming with excitement over a rumor that the first trailer for the upcoming Grand Theft Auto IV had been leaked. Only instead of feasting their eyes on some gameplay footage, /v/ users found themselves watching the music video for the 1987 Rick Astley song “Never Gonna Give You Up.”

The Rickroll was born.

“Rickrolling is a descendant of an older Internet joke called duckrolling,” the New York Times reported on March 24, 2008. “A Web site or blog post would offer a link to something popular—say celebrity photos or video gaming news—that led unsuspecting viewers to a bizarre image of a duck on wheels.”

The meme spread around 4chan with much success, particularly on /x/. The community’s penchant for posting shocking videos made Rickrolling a perfect match for /x/philes eager to trick people into thinking they were about to see a scare video or footage of alien sighting. While Rickrolling helped bring /x/ together, the community still didn’t have a meme to call its own.

But about four days after the Times published its article on the Rickroll, /x/ bottled up some of /v/’s meme magic and created “THEN WHO WAS PHONE?” The phrase was used in a creepypasta, a type of short horror story designed specifically to be shared online. But while most creepypasta tries to scare its readers, “THEN WHO WAS PHONE?” falls into a category of stories that Know Your Meme describes as “poorly written or unintentionally funny.”

The meme was an immediate success. It earned entries on Encyclopedia Dramatica, Urban Dictionary, and Yahoo Answers.

Creepypasta plays a crucial role on /x/, where discussion threads often feel like those fireside chats we all remember from childhood, with someone sharing a seemingly mundane story that ends with a terrifying loss of life or limb.

The difference is that on /x/, many of these tales of the supernatural (and super-creepy) could be true. And /x/philes will go to extreme lengths to get to the bottom of them.

As longtime /x/ lurker and former administrator of the truth portal on Encyclopedia Dramatica h64 told the Daily Dot, “/x/ is one of the only sources of truth on the Internet.”

“Every day, users of /x/ put their lives on the line to bring you the raw goods our masters don’t want us to know,” h64 told the Daily Dot. “Users of /x/ are guilty not only of thoughtcrime, but of sightcrime, the crime of bearing witness.”

These “mindfuck threads” present what appears to be a very common and mundane thing. But upon deeper inspection, there’s something completely out of place hiding among the obvious. An example of such a “mindfuck thread” happened one Saturday after an /x/phile posted the following photo: 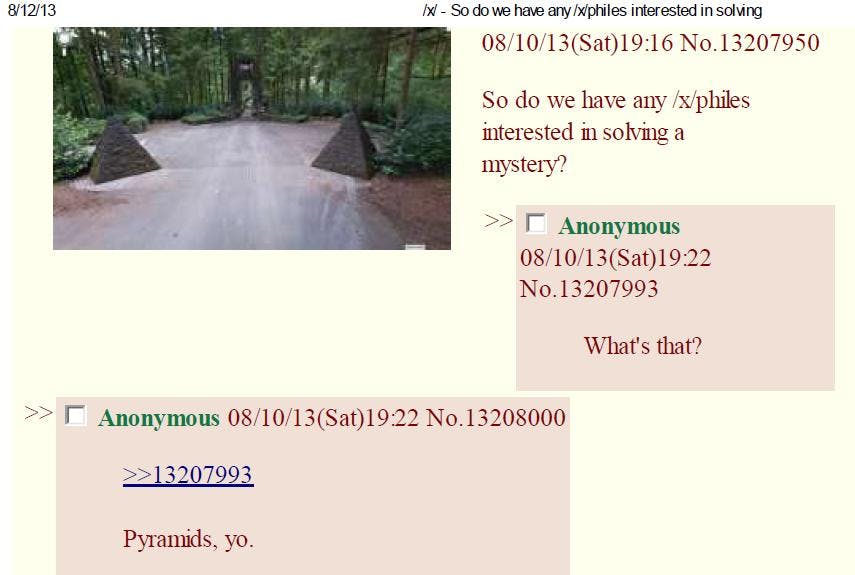 What happened next was exactly what h64 described. /x/ broke the photo down, pixel by pixel, using it to uncover the names of the property owners, phone numbers, and business records for what /x/ deemed a “a cult/temple dedicated to an Egyptian goddess of war and flame in the woods of Oregon.”

This particular thread collected 53 pages worth of research and discussion. All in a day’s work for /x/.

Another mystery that piqued /x/’s interest was that of Jeff the Killer, a five-year-old photo of an ashen face and maniacal smile that is considered to be one of the creepiest on the Internet. 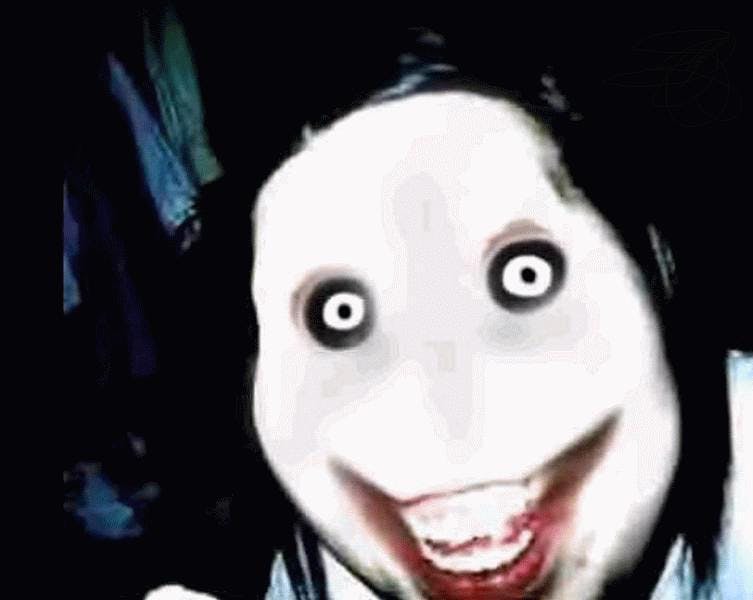 Tired of all the conspiracy theories and blatant lies, /x/ engaged in a fact-finding mission earlier this month, revealing that the unsettling photo was most likely part of a viral marketing campaign to promote the fifth installment of the Saw series.

/x/ combined the raw curiosity of the “mindfuck thread” with its penchant for history when it recently dug into the story behind Luis Jimenez’s “Blue Mustang,” a hauntingly huge statue that rests outside the Denver International Airport. The statue was commissioned by the airport in 1992 as part of its public art initiative. Jimenez was killed while creating the statue after “the horse’s massive torso swung out of control and crushed the 65-year-old artist,” the Wall Street Journal reported. 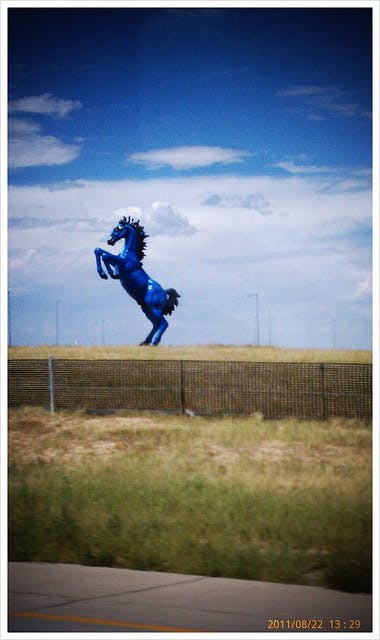 Despite news reports making the statue’s history abundantly clear, /x/philes couldn’t help but use the thread to discuss the National Security Agency (NSA) and how “Blue Mustang” is somehow connected to James Holmes, the man accused of killing 12 people at a Colorado movie theater last summer during a midnight showing of The Dark Knight Rises.

“As a frequent airplane traveler (I have collected over 2,500 miles so far) I can tell you that there is something supernatural going on in the airport,” one anonymous user wrote. “I was sitting in the stall and heard a knocking next to me, I looked under an no one was there, only the smell of sulfur. I challenge anyone to spend some time in those bathrooms and tell me they aren’t haunted.”

While threads such as Jeff the Killer and Blue Mustang cater to users who already have a deep understanding of the Internet’s paranormal culture, /x/’s how-to threads would make any teacher proud. Take, for example, a 29-page thread on how to properly summon a demon:

“First either draw a pentagram or make a ring of salt around the intended area of the summoning circle,” the anonymous author of the thread wrote. “If you want to be extra cautious, then use both a pentagram and a salt circle. If you want to be a fa**ot, then align the top of the pentagram with true north as best you can.”

And last, but surely not least, are the threads where users seek advice regarding personal paranormal occurrences. It’s in these threads where /x/ really separates itself from /b/. While it would be easy to troll a user for asking for advice on voices he or she is hearing, /x/ takes the high road.

The kind of detective work that happens on /x/ may sound obsessive, or even insane. And maybe it is. But often, it’s also accurate. And in a month, the /x/philes’ rigorous attention to detail may finally pay off.

The Pronunciation Book will either go down as one of the greatest Internet mysteries of all time or one of the biggest busts. Either way, something is going to happen in 28 days.

Before it took its strange and sudden turn, the channel had posted 700 short videos, each featuring a flat, male voice explaining how to pronounce words and phrases like “The XX,” “jean,” and “Beyonce.”

But on July 9, 2013, the channel broke its pattern, and began posting one mysterious video a day. These messages included the following:

75: “I’m awake now. Things are clearing up. I’m not saying the words anymore.”

The voice—which now seemed somehow more ominous—ended each of these messages the same way: “Something is going to happen,” it said, and then gave the number of days remaining.

The community compiled the “77 Days Research Document,” a 111-page Google document pooling any info they could find on the Pronunciation Book. After analyzing all 700 of the channel’s messages, tracing domain name registrations, and even running a spectrograph analysis of the silence at the end of each video, they came to the conclusion that Pronunciation Book is a viral marketing scheme, or some kind of Alternate Reality Game (ARG).

/x/ also tried to pinpoint the location of the speaker in the videos. They narrowed it down to the U.S. based on police sirens heard in the background of some of the videos, and then further zoomed in on New York City based on a thunderstorm that could be heard in the video “Radio.”

Working from /x/’s findings, the Daily Dot conducted its own investigation into Pronunciation Book, and what we found was one of the most elaborate marketing projects ever constructed for a major media property. We can’t yet reveal everything we know, but we’ve put our own theory on the record: The countdown will end with the revelation of a Battlestar Galactica reboot.

Since /x/ first began working on the mystery behind the Pronunciation Book, the YouTube channel has achieved an almost cult-like atmosphere on the Internet. Besides the Battlestar Galactica theory, Geekosystem has provided a strong case for the upcoming installment of the Halo series Destiny. One Reddit user has even broken down the numbers of words, syllables, and characters used in each message. And an entire Wiki has also been created to crowdsource any new information.

The one thing we know for certain is that when time runs out, the result won’t even matter.

Because nothing can match the thrill of the search. This is, in a nutshell, what makes /x/ great. The alien will never be as menacing as you think, and Bigfoot is just overly conscious about sun exposure. But with enough evidence and a convincing argument, /x/ can inspire the most headstrong skeptics to suspend disbelief.