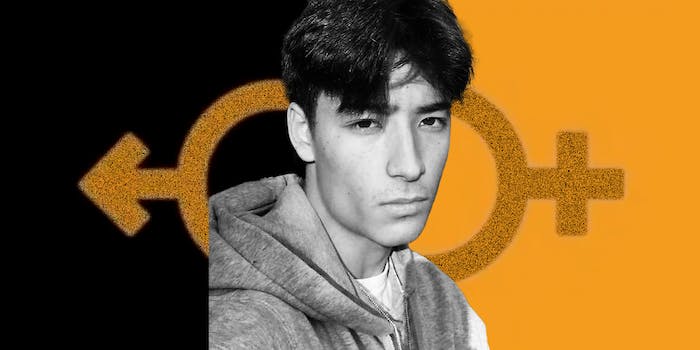 The SS flags are a dead giveaway.

Like many wretched things on the internet, image forum 4chan is largely responsible. But TikToker Kyle Royce first coined the term in a now-deleted video.

In the clip, he complains about being called transphobic for only wanting to date “real women,” a transphobic way of excluding transgender women, and says his solution is to create a new orientation.

He facetiously says being “super straight” means that he only dates “women that are born women.” “You can’t say I’m transphobic now because that’s just my sexuality,” he says.

As Royce’s TikTok video spread, 4Chan users and other trolls used the term “super straight” to weaponize the language and symbols used for the LGBTQ community, like “pride” and the rainbow flag.

On 4chan, users seemed excited to “red pill,” or enlighten, Gen Z users and sow division among transgender people, their queer allies, and the vocal minority that opposes trans rights.

But even on 4chan, the term “super straight” caused division. Some transphobic users insisted that it was just another way of saying “normal” and that using a new term was all a plot—either by Jewish people trying to normalize transgender people or even by the LGBTQ community itself. One user wrote of a conspiracy “to make you slowly accept degeneracy … step by step.”

However, the majority of people engaging on the imageboard thought it was a brilliant trolling opportunity and a way to radicalize young men with right-wing thinking. The forums had a mixture of “we must stay ‘nice’ so that they look like the insane and irrational ones” and the usual racist, misogynistic, and anti-Semitic chatter.

The fact that “super straight” can be shortened to SS, the acronym for the Nazi military branch Schutzstaffel, was especially enticing for some 4chan dwellers. It also caused infighting between those who ran with it and those who said the coincidence made their plan too obvious to the target audience.

On Monday, the hashtag #superstraight went viral. While the push to popularize it began with 4chan, plenty of garden variety bigots leaped on board. In some cases, it’s hard to tell who’s trolling and who believes it’s a real identity. “I’m #superlesbian and we’ve been getting harassed for years because of our orientation,” one user wrote. “I stand with #superstraight.”

TERFs, the LGB Alliance, and other established transphobes used the term to validate their bigotry in yet another way. Some used “super straight” to attempt to co-opt hate crime legislation designed to protect LGBTQ people.

Super Straight U.K. started a Change.org petition asking the government to recognize “super straight” as a minority sexual identity that by Monday had more than 2,000 signatures.

But TikTok and Twitter were full of people, especially Gen Z users, pushing back against the bigotry inherent in the concept of “super straight.” “Real revolutionaries date trans women,” one user said.