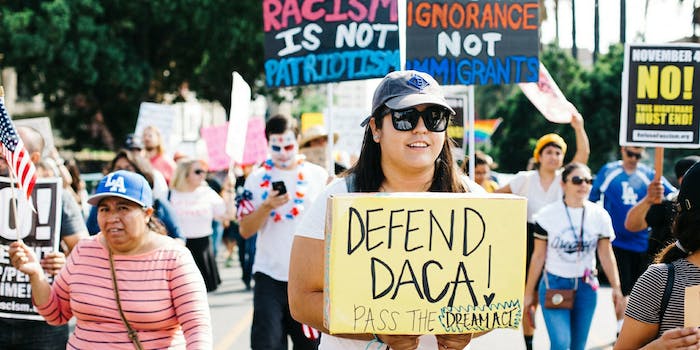 50,000 DACA renewals have been approved since Trump was ordered to restart program

However, the figures also illustrate why Congress still needs to act on a path to citizenship.

The Trump administration approved more than 55,000 applications from current or previous recipients of the Deferred Action for Childhood Arrivals (DACA) program within the first three months of 2018, according to a document filed in court Monday. The administration also received nearly 65,000 applications from current or previous DACA recipients in the same time period.

The Justice Department, as reported by BuzzFeed News, submitted the quarterly report in court Monday in regards to an ongoing suit with the state of California over President Donald Trump’s Sept. 5 rescinding of the program. According to a DACA demographic report from the USCIS also submitted Monday, an estimated 693,850 people were DACA recipients as of March 31. A spokesperson from U.S. Citizenship and Immigration Services (USCIS) clarified 26,350 of a separate group of DACA recipients are waiting to have their applications renewed for another two years.

The information comes months after two federal judges in California and New York issued injunctions to Trump’s ending of the program, allowing people who currently or previously had DACA to reapply. The injunctions, ordered Jan. 9 and Feb. 13, required the Trump administration to reissue the DACA program as it had been before Sept. 5. However, people who qualify for DACA but have never before been a recipient of the program cannot now apply.

Together, the quarterly report and demographic report show the progress made to shield certain Dreamers, undocumented childhood arrivals, from deportation for another two years under the DACA program. However, the documents show a simultaneous urgency for Congress to find a pathway to citizenship for Dreamers, as illustrated by the pending DACA reissues and renewals filed by people who previously fell out of status, or fell out of status since reapplying, leaving them vulnerable to ICE detainment and deportation as a result of Trump’s March 5 deadline.

According to the quarterly document, more than 70,000 applications from current and previous DACA recipients were submitted this quarter, though more than 6,000 of those were initially denied before being forwarded to USCIS for further review. By the end of the quarter, March 31, USCIS still had pending decisions on over 51,000 initial and renewal applications and 4,000 applications were either denied, terminated, or withdrawn. For people whose applications were approved, they are now shielded from deportation for two years, and can legally work in the U.S. during that time.

More alarmingly, the demographic report, clarified by a USCIS spokesperson, shows that by March 31, about 9,000 people fell out of status either before or after applying to have their DACA renewed; they are still waiting to hear back from USCIS, making them vulnerable to deportation. Another estimated 15,500 who filed “initial” applications for DACA after previously falling out of status or who have requested an initial grant of DACA and have never had DACA previously were waiting to be approved as well.

According to the DACA demographic report, a majority of those with pending applications, nearly 90 percent, will fall out of status this year should their DACA permits expire before their renewals are approved. The USCIS did not immediately respond to the Daily Dot’s request for clarification regarding the two reports.

“As a result of the nationwide injunction we secured, at least 30,000 Dreamers who have renewed their DACA status—our colleagues, our classmates, our teachers—can go home to their loved ones at night and keep helping build a better America,” California Attorney General Xavier Becerra said in a statement to BuzzFeed News. “I’ll keep fighting at every turn in court for Dreamers’ rights and opportunities, so they may continue to make meaningful contributions in California and beyond.”