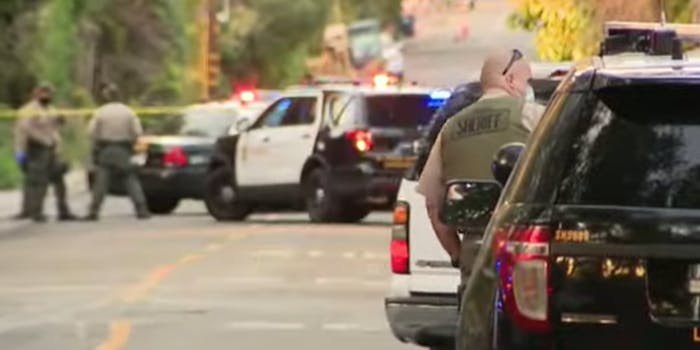 Woman found dead after getting attacked during Zoom call

A colleague who witnessed the attack via Zoom called the police.

An attack witnessed during a Zoom call led to the discovery of two homicide victims in Los Angeles on Monday.

One of the victims, a woman, was reportedly on Zoom with a colleague when the other victim, a man, was attacked. The woman’s colleague is reportedly the one who called the police after seeing the violence occur in the background. “The Zoom caller witnessed the attack on both the male and female and called 911 to report the crime,” the sheriff’s department said in a news release.

Lt. Barry Hall of the Los Angeles County Sheriff’s Department Homicide Division told NBC Los Angeles that the colleague was under the impression they were witnessing a kidnapping.

When police arrived, they found a deceased man in a driveway and a deceased woman in the house, both of whom were in their 60s and had been stabbed to death.

“The male was inside the house,” Hall said. “The lady was still talking on the Zoom when the male was dragged out of the house. That alerted her. Then, the suspect went inside and attacked her.”

A man reportedly drove up to the residence in one of the victim’s cars while deputies were investigating the crime scene. The man, who has since been identified as 32-year-old Robert Cotton, reportedly told authorities that he lived at the home.

Authorities reportedly detained Cotton before later arresting and booking him on two counts of murder. He, according to CBS Los Angeles, was a relative of the female victim.

“You could see the deputies running up the hill,” a neighbor, Darlene Thomas, told NBC Los Angeles of the deputies’ interaction with Cotton. “He just held his hands up and got on the ground.”