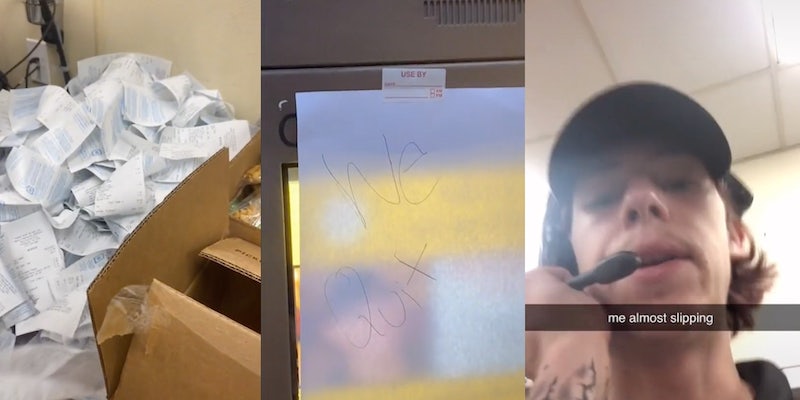 The TikToker's video documents the working conditions that led to the mass exodus.

In a viral TikTok, a former Wendy’s manager revealed the working conditions that led to him and more than a dozen fellow employees quitting on the same day.

The video, posted by @mintjuul.666, starts off with a clip of the Wendy’s drive-thru screen covered with a white sheet of paper with the words “We Quit” written in pen.

After working through the pandemic for a few months, several people realized “how shit it was” to work at the fast-food restaurant and quit, @mintjuul.666 explains.

The former employee says he kept the store running without a general manager for three months. The entire time he says he was pulling 85 hour weeks—more than double the full-time workload—with no days off the entire time. On top of it all, the TikToker alleges he was making $14.77 an hour to essentially run the business.

While a new general manager was eventually hired, the TikToker says “she came in and essentially ruined this place within two weeks.” After her arrival, the 34 people still working at the Wendy’s were on the brink of quitting, he claims.

“I was just tired of it. No upper management helped me at all throughout those three months,” @mintjuul.666 says. “I was by myself, and I did it all alone. And one day, I just came in, and I said, ‘I’ve had enough’ and I couldn’t do it anymore.”

Once @mintjuul.666 told his fellow workers he was burned out and planned to quit, about 17 other people quit alongside him. That night, the soon-to-be ex-employees closed the place around 8pm, had a taco night in the fast-food establishment, and closed the store without cleaning up as they normally would, he adds.

The video calling out the burger joint has more than 1.3 million views on TikTok. Throughout the video, there are clips that exude a general sense of camaraderie between the employees before half of them apparently quit.

The majority of the comments are of people expressing how appalled they are by the restaurant’s alleged working conditions, lack of support, and meager pay.

“85 hours a week is almost literally double the legal limit in Denmark. America’s work market is out of a dystopian sci fi novel,” @rasmuslds wrote.

“This is the big wake-up! People are going to do this more and more and this will expose some huge issues for working conditions and how much people should be paid. MAKE THEIR POCKETS HURT!!!” another replied.

The Daily Dot reached out to Wendy’s for comment via email and to @mintjuul.666 via TikTok comment.