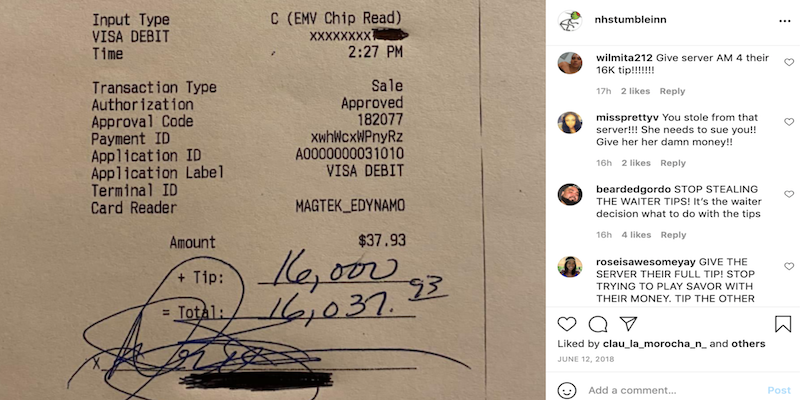 People are review bombing the restaurant.

An anonymous customer at a New Hampshire restaurant left a $16,000 tip on a $37.93 tab, but people online are outraged that the entire tip did not go to the server. “The waiter who did the work deserves ALL of the 16k,” one user wrote.

The tip was left at the Stumble Inn Bar & Grill in Londonderry, New Hampshire, on June 12 by an anonymous diner who ordered chili cheese hot dogs, pickle chips and a tequila drink. According to Today Food, before the bartender serving the man realized the large tip he had left, the man told her, “Don’t spend it all in one place.”

The restaurant owner, Mike Zarella, told Today Food that the tip will be split among the bartenders and kitchen workers. While some people online saw the story as an act of kindness from the anonymous diner, others are angry that the $16,000 tip was split.

“So lemme get this straight,” one user commented on Twitter. “The same owner that’s OK with paying their servers $2.13 an hour ‘since they get tips’ is gonna turn around and decide what this employee has to do with the tip? I think the fuck not.”

Under federal and state law, tips belong to the employee, not the employer. In New Hampshire, state laws do allow the employer to take a tip credit, which means the employer can count all or part of an employee’s tips toward the required minimum wage. New Hampshire however, does not require employees to pay part of their tips into a tip pool to split with other employees.

People are making GIFs and memes expressing their outrage over the tip. From videos of people throwing around tables to starting fights, people share how they would feel if their $16,000 tip was taken from them.

According to WHDH anchor Amaka Ubaka, the decision to split the money was not one person’s decision, and the restaurant normally splits tips evenly between all bartenders and servers. The owner also received none of the $16,000 tip.

However, that hasn’t stopped people from leaving comments on the restaurant’s social media platforms and Google reviews page. The most recent post on the restaurant’s Instagram posted in 2018 is filled with peoples’ demands to give the server their full tip.

“If you can’t pay your servers a living wage, you should go out of business,” one user commented.

Whether people online agree with how the tip was split, the owner said the money has helped the restaurant’s employees, including single moms, to afford time off to plan vacations.

“People that are well-deserving got a huge tip,” Zarella said.

The Stumble Inn Bar and Grill did not immediately respond to the Daily Dot’s request for comment.