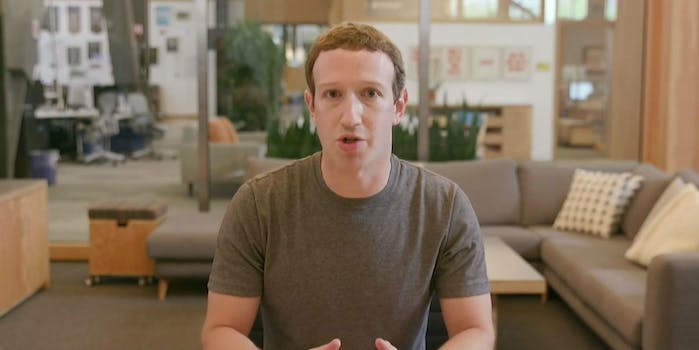 Mark Zuckerberg to meet with lawmakers before getting grilled by Congress

A last-minute cram sesh before an impossible test.

Mark Zuckerberg is reportedly meeting with U.S. lawmakers on Monday, a day before he gets grilled by two congressional panels about the role Facebook played in the Cambridge Analytica data scandal.

Members of the committees before whom Zuckerberg will testify are expected to be present at the Monday meetings reportedly taking place on Capitol Hill; they will mark the final preparations before the two-day hearings. Facebook previously hired a team of experts, including a former assistant to George W. Bush, to take Zuckerberg through a “crash course in humility and charm,” the New York Times reports.

The beleaguered executive is scheduled to go before a joint hearing of the Senate Judiciary and Commerce committees on Tuesday, and the House Energy and Commerce Committee on Wednesday. Zuckerberg agreed to face questions about how Facebook protects user data after it was revealed that a third-party app disguised as a personality test wrongly sent the personal information of 87 million users to a political data firm working for President Donald Trump.

Facebook lost more than $100 billion in value in the past few weeks as its shares plummet, and critics are now urging Zuckerberg to step down as the company’s reputation crumbles. Zuckerberg said in an interview with members of the press that he has no intention of doing so.

“The reality of a lot of this is that when you are building something like Facebook that is unprecedented in the world, there are going to be things that you mess up,” Zuckerberg said when asked if he should continue to lead. “And if we had gotten this right, we would have messed something else up. I don’t think anyone is going to be perfect, but I think what people should hold us accountable for is learning from the mistakes and continually doing better and continuing to evolve what our view of our responsibility is.”

Facebook is just now telling users if their personal information was used by Cambridge Analytica. You can find out if your data was affected by following these instructions.