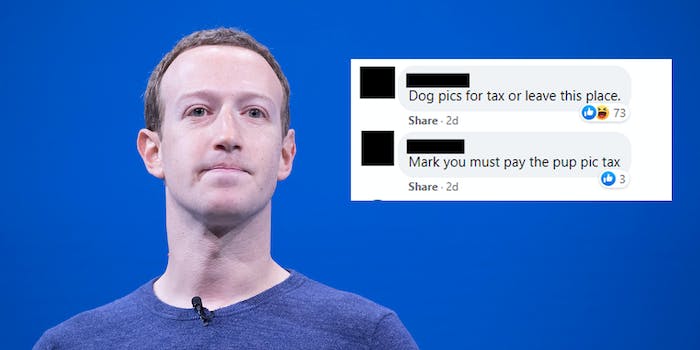 People pointed out he didn't attach dog pics to his post.

Facebook CEO Mark Zuckerberg popped into a popular dog-focused Facebook group earlier this week—but was quickly reminded that he broke one of the group’s major rules.

Zuckerberg posted in the “Dogspotting Society” Facebook group on Tuesday to tell its 1.1 million members about a new feature the social media giant is rolling out that allows admins of groups to designate members as “experts.”

“Today we’re rolling out some new features to help groups elevate experts and discussion within their communities. This includes the ability for admins to designate community members as group experts with a badge. Admins can collaborate with group experts to host Q&As, share perspectives, and respond to questions,” Zuckerberg wrote to the group.

While Zuckerberg did mention his own dog, Beast, he didn’t adhere to one of the group’s most important guidelines: posts need to include pictures of dogs.

His post didn’t include pictures, and people were quick to point that out:

“You think you can just come in here without posting a photo of your dog? SHOW US THE DOG,” another person commented.

“we need pictures of your pup. It’s the rules,” another person reminded Zuckerberg.

Here’s a few of the comments that people had after Zuckerberg posted.

“That was fun! Thanks for jumping in and Jeff, Marty and Jason for having me here today. This is a great group — keep up the dog spotting! Here are all the photos I shared…,” Zuckerberg wrote.