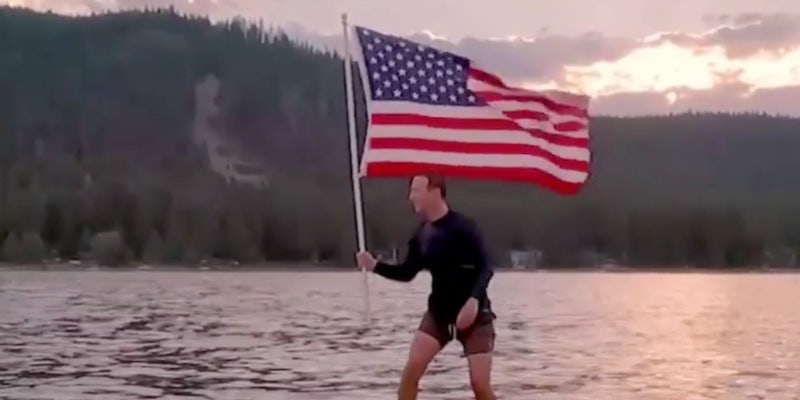 The video is set to 'Take Me Home Country Roads.'

In a totally natural, not at all weird video posted to Instagram on Independence Day, Mark Zuckerberg hovers above water on a costly toy while holding a large American flag. People on the internet are roasting the Facebook CEO over the bizarre, seemingly out-of-touch video.

The video’s soundtrack is “Take Me Home Country Roads” by John Denver. One Twitter user compared the artist to the controversial tech leader.

“John Denver was an American treasure and his song catalog is incredible and enduring,” the user wrote. “Zuckerberg stole a website in college to harass the girls who wouldn’t date him.”

Zuckerberg, who is estimated to have a net worth around $128 billion, has previously been roasted for how much sunscreen he uses when trying to hide from the press.

Hovergliders like the one he is using in the video are called hydrofoils, and according to Google Shopping, they cost anywhere from $1,800 to $12,000. The board sits above the water, which is why the bottom of it is visible for much of the video.

Meme creators have also edited Zuckerberg and his flag in multiple ways so that he appears to hold different flags or have a different person’s head on his shoulders. One Photoshopped image shows him carrying the Communist flag; another shows a shark about to swallow him whole.

Some people were also perplexed that the billionaire faced ridicule for sharing a video of himself partaking in his hobbies on a patriotic holiday.

“Why is everyone hatin’ on Zuckerberg because of that vid?” one user wrote. “I thought it was cool and if I could stand on one of those things I’d put it on TikTok and become famous like him.”

“I don’t understand why people hate Zuckerberg so much,” the user wrote. “He’s rich, which is very admirable.”