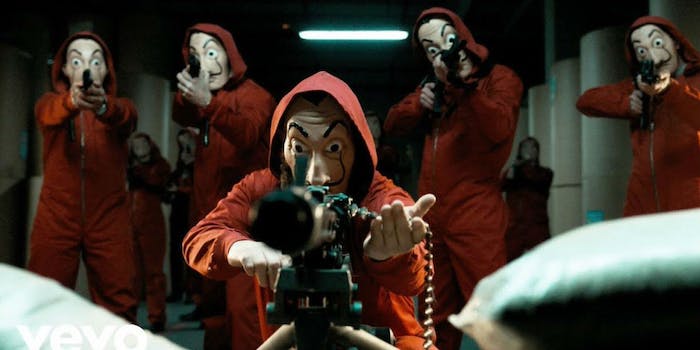 The most popular videos on the internet were defaced and removed from YouTube earlier today in what appears to be a cyberattack.

Luis Fonsi and Daddy Yankee’s “Decpacito,” the most-viewed video on YouTube and the first to reach 5 billion views, was removed and replaced by a disturbing image of masked men in red hoods holding guns. The scene was taken from Casa de Papel a Spanish-language heist show on Netflix. The video’s description was also altered, with the hackers, who call themselves Prosox and Kuroi’sh, writing “Free Palestine.”

Some of the descriptions include the phrase “@OpIsrael,” a reference to Anonymous’ annual attack on Israel, which takes place each year on April 7. It generally involves DDoS attacks, website defacement, and data theft attempts with the declared goal to smear Israel. The attack comes a few days after the scheduled attack and hours after “Despacito” reached its latest views milestone.

Many of the affected videos were hosted by Vevo, though it’s unclear whether the hack was limited to a single service. At the time of writing, all the music videos appear to have been restored.

A Twitter account apparently belonging to one of the hackers wrote, “It’s just for fun, I just use [the] script ‘youtube-change-title-video’ and I write ‘hacked.’ Don’t judge me I love YouTube.” Another Twitter account with the username Kuroi’sh took responsibility for the hack and threatened to take down more accounts, including NASA, Jake Paul, and Logan Paul.

We have reached out to YouTube and will update this article if we hear back.

Update 10:04am CT, April 10: A spokesperson for YouTube acknowledged the incident in a statement to the Daily Dot but stopped short of calling it a security breach. The company claims a limited number of Vevo videos were affected.

“After seeing unusual upload activity on a handful of VEVO channels, we worked quickly with our partner to disable access while they investigate the issue,” YouTube wrote.

A spokesperson at Vevo confirmed the cyberattack in a statement to the Daily Dot. The video-hosting site says it’s still recovering from the hack and investigating its source.

“Vevo can confirm that a number of videos in its catalogue were subject to a security breach today, which has now been contained. We are working to reinstate all videos affected and our catalogue to be restored to full working order. We are continuing to investigate the source of the breach,” Vevo wrote.