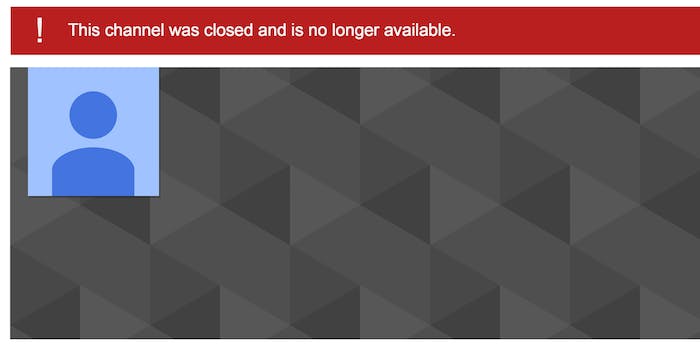 From a video of Supreme Leader Kim Jong-Un climbing an active volcano to reports that archaeologists discovered a unicorn lair, the YouTube channel of the Korean Central News Agency offered the world a hilarious thought alarming look at the extent of the Hermit Kingdom’s propaganda. But those days appear to be over.

The Washington Post reports that YouTube’s takedown of the channel had nothing to do with its content and was instead due to U.S. economic sanctions that prevent American companies from doing business with certain North Korean entities.

North Korea conducted its fourth nuclear test back in January—a move that raised alarm bells among world leaders and resulted in the United Nations calling for more aggressive sanctions of the Democratic People’s Republic of Korea. Even China—the only country still buying North Korean coal—has complied with harsher sanctions on the regime.

President Barack Obama issued an executive order in March that blocked U.S. companies from doing business with any entity that engages in censorship on behalf of the North Korean authorities.

While Google and YouTube (a Google subsidiary) won the legal battle on free speech that arose as a result of the infamous 2012 YouTube video Innocence of Muslims, the company has grown more receptive to demands from the government that it police content in the interest of national security. For example, ISIS was able to use YouTube as a valuable radicalization tool. YouTube removes violent and sexual content from its site, as outlined in its community guidelines, and it aims to remove content that promotes terrorism.

YouTube had no good reason to censor the North Korea’s G-rated hour long broadcasts of its state-run propaganda mill until Obama’s executive order. Ironically enough, virtually all the viewers of North Korea’s state-run YouTube channel are from outside North Korea. Very few North Koreans have access to the internet.

But North Korean propaganda has taken a turn for the worse.

B.R. Meyers, a leading scholar on North Korean propaganda, told Slate in January that a decline in the quality of its propaganda was just another way the dictatorship under the reign of King Jong-Un was stumbling.

“It’s not just how clumsily Kim’s public image is managed, to mention here just the decision in 2014 to film him hobbling around on a cane. It’s also the way in which the North misses great opportunities to exploit anti-government sentiment in South Korea. There are many ways to pillory South Korean President Park [Geun-hye], and score points with the South Korean left while doing so, but mocking her on sexist grounds is not one of them! Then there were those racist comparisons of President Obama to a monkey in an African zoo. It’s becoming ever harder for soft-line observers of North Korea to go on pretending that this is a left-wing state, and the blame for that has to go to the propaganda apparatus.”

A visit to the Korean Central News Network’s Facebook page (which still exists) indicated that the latest video posted by the state-run network was a nearly four-minute music video tribute to Kim-Il-Sung, North Korea’s original leader whose birthday is a national holiday celebrated with same importance that most Americans reserve for Christmas.

The Kim-Il-Sung music video is still up and running on YouTube, but efforts to play any of KCT’s daily news broadcasts yielded this message:

A fan of North Korea’s news station of record in late November alerted the network that YouTube deleted its account. He then begged it to move operations to an older YouTube channel of KCT called North Korea Today that still exists. Alas, a look at the channel—which totals more than 20,000 subscribers—reveals why. North Korea Today appears to only host North Korean music videos and older content, such as this 2013 speech of Kim Jong-Un before a meeting of the Worker’s Party.

North Korea’s news coverage isn’t only a way to misinform its natives—it serves as a message to the outside world.

Collins points to the fact that Korean Central Television’s YouTube channel has English subtitles as a clear indicator that North Korea is well aware the world is listening.

While Collins says North Korea has a wide range of different motives for sending signals to the outside world, one method has been to express anger and discontent at U.S. policy. For example, one infamous propaganda video from 2013 depicted the U.S. Capitol and White House exploding after a missile attack by North Korea.

But Collins doubts YouTube’s takedown of the Korean Central News YouTube channel will put a permanent damper on North Korea’s external communications—the network will likely just set up a different YouTube account or make the content available through another party.