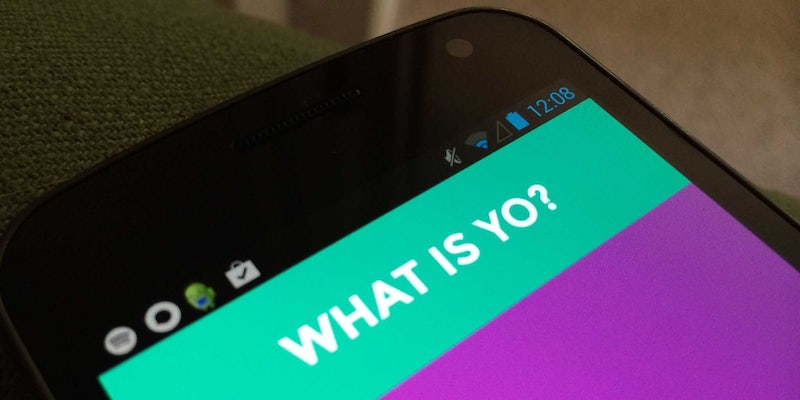 Yo is going to become more than just… yo

As much as it pains us to admit it, Yo might have a point . The app began as a joke that its own creators were wary of attaching their names to. Following its inexplicable success, Yo is usually regarded as either a symptom of everything that ails the tech industry or a joke too clever for its own good. But Yo apparently has bigger plans—ones that people are starting to take seriously, for better or worse.

The simplest single-purpose app in existence could be worth as much as $10 million after raising $1.5 million in an investment round that included names like Mashable founder Pete Cashmore and Chinese tech titan Tencent.

If you’ve yet to Yo, know that Yo is an app that lets its users send the word Yo to one another. That’s it—that’s actually all the app does, for now. It’s available for iOS, Android, and Windows Phone, and at the time of writing boasts a four star rating in Apple’s app store from users apparently in on the joke. But is it a joke?

After speaking to the Daily Dot in June, Yo’s CEO Or Arbel has detailed more about his aspirations for the bare bones app in an interview with the Wall Street Journal. Arbel revealed that Yo plans to plug into RSS, so users could receive updates from selected feeds over Yo. The app’s creators also plan to build Yo out considerably (remember: Yo’s current feature count is one), adding profile pictures and names to user profiles, currently limited to a user’s unique Yo username.

“This is only the beginning,” Arbel told us back in June. A year from now, Yo is “how you’re going to get lightweight notifications.”

It’s hard to take Yo seriously, but we’ve seen a few applications in action already. In Israel, Yo can warn residents of incoming Hamas missile strikes from the account “REDALERTISRAEL.”

Like RSS, an Internet notification and subscription protocol that dates back to 1999, users could subscribe to Yo’s contentless notifications to get updates from just about anything. With no actual content to supervise, Yo wouldn’t be subject to the same abuses as other social apps that regularly struggle to balance harassment with open communication. Yo would become not just a way for users to nudge or nod at one another, but a notification platform with limitless possibility.

It’s bizarre to imagine, but Yo might have legs. Yo isn’t unique—notification tools like IFTTT already provide far more interesting and clever notification platforms—but, for whatever reason, Yo might be the one that takes off.