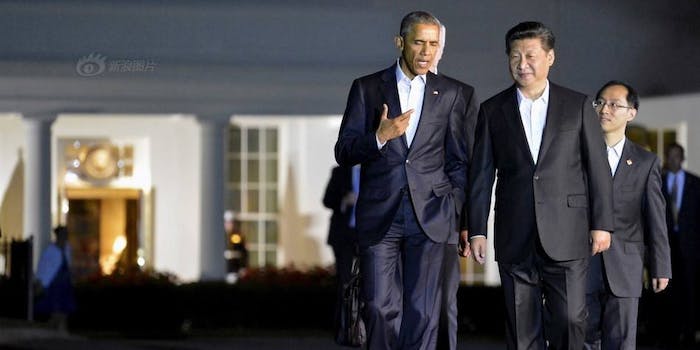 The message from the world’s most censorial regimes is simple.

The message from the world’s most censorial regimes is simple: Do as I say, not as I do.

Chinese President Xi Jinping is chronicling his landmark visit to the United States on Facebook, the world’s largest social media network—and one of the biggest websites strictly censored in China.

Xi’s social media presence in the face of sweeping domestic censorship is a tried and true move pioneered by countries like Iran and North Korea.

Despite a ban on Twitter inside Iran, the country’s most prominent politicians have Twitter accounts that broadcast their message around the world with unparralleled strength and speed.

Landing in NY shortly to attend #UNGA. My heart goes out to #MinaStampede victims & families. Gov is ready to help. pic.twitter.com/qqJLwCuQpQ

North Korea’s censorship regime dwarfs even China and Iran. Instead of banning individual sites, North Korea foregoes the Internet entirely and runs its own national intranet known as Kwangmyong (translated as “bright”), with over 1,000 websites and its own domestic social network.

Twitter is not available to North Koreans, but the government itself has an account from which is praises the “happiness of the Socialist system” among other maximally positive messages.

For leaders like China’s Xi, Iran’s Ayatollah Ali Khamenei and President Hassan Rouhani, and Supreme Leader Kim Jong-un of North Korea, Facebook and Twitter represent unique opportunities to talk unfiltered to the rest of the world, even as they rigorously filter the speech of their own citizens.