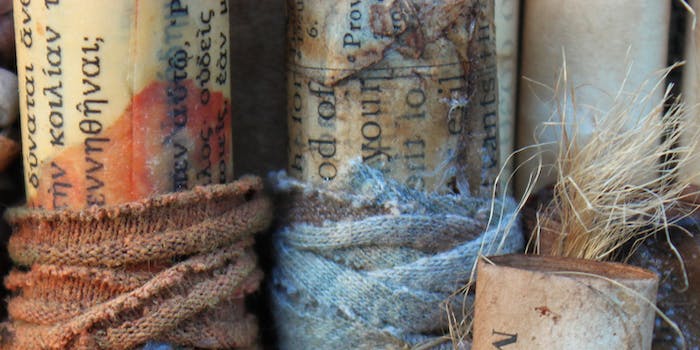 Technology of the future is helping us unlock the past.

For centuries, the scrolls of Herculaneum were thought to be lost, the text destroyed forever after being scorched black and buried by the eruption of Mount Vesuvius in AD79. Now, thanks to a 3D X-ray imaging technique, researchers in Italy may have discovered the key to reading what was once thought undecipherable.

Researchers at the National Research Council’s Institute for Microelectronics and Microsystems (CNR-IMM) in Naples, Italy, were able to separate out the text from the volcanic residue using X-ray phase contrast tomography (XPCT), a process sometimes used in breast-cancer scans and other medical procedures.

By placing the scroll in the path of a laser-like beam from a powerful synchrotron X-ray machine, the CNR-IMM team was able to discern the difference between black ink and charred papyrus paper. The scientists saw small distinctions in how the two materials refracted the X-rays.

Researchers were pleased to find that the ink had not merged into the fibers of the papyrus scrolls; had that happened, deciphering the text with XPCT would likely have proved impossible. The miniscule difference between the two layers allowed the scientists to reveal text nearly 2,000 years old.

This slight contrast, made possible by the X-ray technique, allowed the researchers to recognize individual Greek letters on the scroll. The team has managed to reveal several distinctive words, including a word meaning “would fall” and another meaning “would say.”

It will still be very challenging to decipher the full text: The scrolls were blasted by incredibly hot gases, leaving the papyri so fragile that unfurling them would risk destroying them. The XPCT-aided deciphering process lets researchers spot floating letters on the scroll, but the team will then have to place the letters in order to recreate the texts.

The scrolls come from the library of Herculaneum, a Roman city destroyed along with Pompeii during Mount Vesuvius’ fateful eruption. The Roman library was excavated in the 18th century and gifted to Napoleon Bonaparte in 1802. The scrolls now belong to the Institute of France.

Further inspection continues to reveal more information about the scrolls, but researchers believe they already have some idea as to the documents’ author. Handwriting comparisons suggest that the text on the scrolls is similar to that of Epicurean philosopher Philodemus, who may have written the text during the first century BC.

Dr. Vito Mocella, who leads the CNR-IMM team, believes that his researchers can still improve the X-ray scanning technique. The scientists intend to pursue other technology-assisted avenues for enhancing the process.

H/T The Guardian | Photo via psyberartist/Flickr (CC BY 2.0)