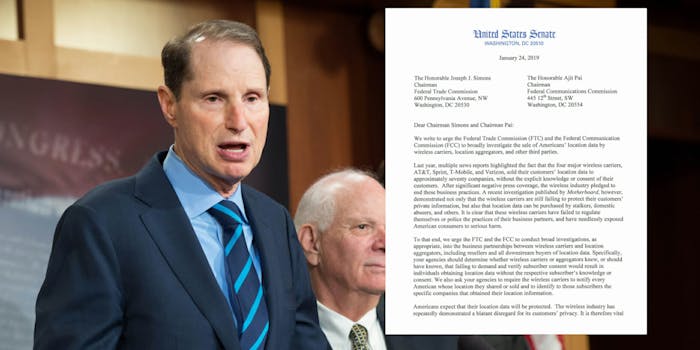 The letter features a number of prominent Democrats.

A group of 15 senators—including a number of high-profile Democrats—are calling on the Federal Trade Commission (FTC) and Federal Communications Commission (FCC) to “broadly” investigate how mobile carriers share location data to third parties.

The call for an investigation comes on the heels of a report by Motherboard that carriers such as AT&T, T-Mobile, and Sprint sold real-time location data of its customers and proved it by paying a bounty hunter $300 for geolocation.

On Thursday, a number of prominent Democrats—including a few 2020 announced and potential presidential hopefuls—signed off on a letter calling for an investigation.

The letter highlights the recent report from Motherboard as a reason for an investigation.

“It is clear that these wireless carriers have failed to regulate themselves or police the practices of their business partners, and have needlessly exposed American consumers to serious harm,” the letter reads.

The Motherboard report also sent waves through the other chamber of Congress. In the wake of the report, House Energy and Commerce Committee Chairman Frank Pallone, Jr. (D-N.J.) said FCC Chairman Ajit Pai refused to brief his committee on the issue.

The FCC told the Daily Dot at the time they were investigating the matter but were halted because of the government shutdown.

“Two weeks ago @motherboard @vice found anyone could pay a few hundred dollars & learn where your mobile phone is within a few hundred meters. That’s outrageous. I called for an investigation. Today 15 senators called on @FCC & @FTC to take action. Amen,” she wrote.

Two weeks ago @motherboard @vice found anyone could pay a few hundred dollars & learn where your mobile phone is within a few hundred meters. That's outrageous. I called for an investigation. Today 15 senators called on @FCC & @FTC to take action. Amen. https://t.co/bsELwZD5Gm

Amid all of this, digital-rights organization Fight for the Future announced that more than 20,000 people had signed petitions calling for an investigation.

“People’s basic safety and security should not be a partisan issue, so it’s great that members of Congress from both sides of the aisle are speaking out, but we need more than words,” Evan Greer, deputy director of Fight for the Future, said in a statement. “We particularly need GOP lawmakers to call on their party’s FCC chairman, Ajit Pai, to immediately investigate whether laws were broken. And we need all of Congress to act to ensure that this practice is permanently banned and that this never happens again.”

You can read all of the senator’s letter here.