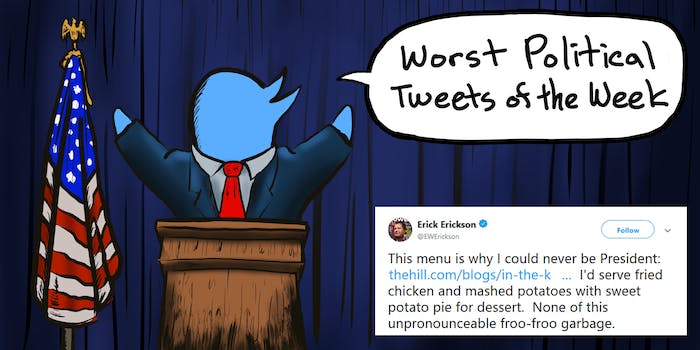 The worst politics tweets of the week: April 20-27

They suck. Whether they are the president lamenting how all of America is conspiring against him, or your own personal Westworld fan theories, no one wants to read any of them. They’re all terrible.

But some are so bad they most be highlighted, mocked, shared, shamed and stared out for hours in slack-jawed awe.

AW: The best part about that is she tagged the Trumps. I guess it’s not out of the realm of possibility that the president would retweet something like that though, given his past… questionable past retweets.

DC: Yea, well it’s a delightful level of desperation that everyone on Twitter I think understands. Her excellent tweet didn’t go viral, and so she tried to boost the engagement. Been there. Done that.  My only question is is this real or did she stage it?

AW: Thirsty for those retweets. It could be staged. I just don’t see someone shopping at Costo thinking “you know what I need to do right now? Put James Comey‘s book in a random toilet.” But she did say “REAL” so it can’t be staged, right?

DC: Man, that Comey really fixed the election to prevent Trump from winning, (which he did), so I’m gonna show him. I guess anything’s possible in Arizona though.

AW: David, what’s your ideal State Dinner menu? Does it involve things you could get at KFC?

DC: Don’t get me wrong, I love fried chicken, but the Trumps are serving jambalaya, which is authentically American (nothing is more American than a cross-cultural, stew-type dish). If you can’t appreciate that, what does your America look like? Well… white I guess.

AW: I don’t know if jambalaya is something I’d call “unpronounceable.” It’s pretty straight-forward. Sound it out. (Side note, it’s delicious). The other thing they are apparently serving is “rack of spring lamb” so I don’t know where he’s getting this ‘unpronounceable’ thing from.

DC: You’re forgetting the “b” in lamb is silent.

AW: First thoughts here is that Bernie Sanders is apparently first? Also, The Rock (who I don’t think should run) is so low! The dude is beloved by so many. Cory Booker being third is spot on, though, RNC. He’s a winner.

DC: This is a joke, I presume, but it is like… a horribly executed one at that. First off, the Republicans ran for president on a campaign of rampant sexism for president in 2016, and now they are reviving a list that was (rightly killed) for being sexist and… have they seen the sexy man they are running for 2020? Have they looked in the mirror lately? I mean, I guess they are saying Dems are the party of lookers, which is true, so is this a self-own?

AW: If it is serious, it was a big oversight having Michelle Obama so low. Have they seen how much people love her? Also didn’t Mark Cuban say he’d potentially run as a Republican?

AW: I don’t even know where to begin with this.

DC: I think that’s where we call it a week.

Like our list of the week’s worst political tweets? Want to hear more from the Daily Dot’s politics team?