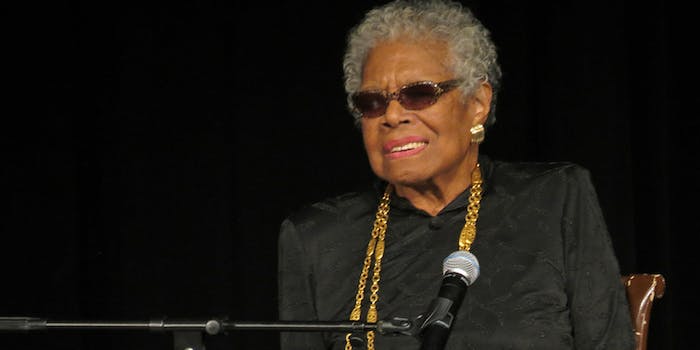 So much for resting in peace.

Conservatives are having a rough week. First they were up in arms about how the #YesAllWomen hashtag identified and challenged institutional misogyny; now they’ve been forced to contend with the death of a respected female writer of color.

The most excoriating right-wing response to Maya Angelou’s passing came from occasional Fox commentator Debbie Schlussel, who took the poet’s message of tolerance for Islam (delivered on the anniversary of 9/11), support of Palestine’s right to exist, inklings of communist sympathies, and unfortunate decision to speak at Louis Farrakhan’s Million Man March in 1995 as proof of her racist, fundamentally anti-American character. Naturally, Schlussel was trying to get a rise out of “Black Twitter” and, playing the victim, retweeted furious replies to her blog post, which noted that she’d never actually read Angelou’s work and expressed the fervid wish that the author “rot in hell.”

A quick search of “#tcot + Angelou” revealed that Schlussel was hardly alone in her deranged loathing for the beloved author. The so-called “top conservatives on Twitter” had a virtually inexhaustible list of gripes as to her influence on the sociopolitical landscape.

The death of #MayaAngelou can mean only 1 thing. More Obama funeral selfies. #tcot

To all the so-called “conservatives” upset that we aint crying about Maya Angelou: Toughen up: if u play nice you’ll continue to lose #tcot

RIP Maya Angelou, most overrated poet of our time. #tcot

Obama has turned America into the “Caged Bird” Obama supporter Maya Angelou was writing about. #tcot

Maya Angelou dead! How will the country function without an angry socialist poet who hated America and all it stands for? #tcot

In a bizarre wrinkle, other conservatives chose to highlight Angelou’s anecdote about firing a gun at a home intruder (as well as her criticism of President Obama’s education policies) in the hopes of undercutting her image as a liberal voice. The result? An amusing schism between Second Amendment enthusiasts and the rest of the Tea Party peanut gallery.

#Poet RIP Maya Angelou. I remember the time she praised #guns b/c she used 1 2 stop an assault. http://t.co/w7KjFbUDuW #GunSense #2A #tcot

.@BJ_Schwartz Fascinating that the #tcot loons can’t decide if #MayaAngelou was a gun-loving ‘Murcan or a Jew-hating Castro-lover.

But appalling as some of these reactions to Angelou’s death are, they’re not exactly novel; due to her closeness with Obama, she had long suffered this sort of tangential abuse.

Wonder if Maya Angelou has a poem about her Commander-in-Chief sleeping through #Benghazi and covering it up. #tcot

Too bad God won’t get a word in edgewise till that font of sputtering rage dries up.