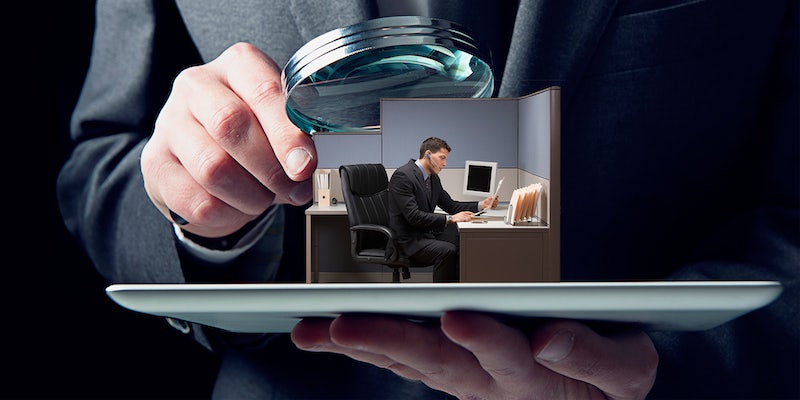 How local governments are surveilling workers

Read the rest of the Work Shift series here.

If the workplace is truly dead, then bossware helped bury it.

Big brother-like software allows companies to monitor employees who work from home. By cracking down on web usage, tracking keyboard strokes, and monitoring productivity, surveillance software allows your boss to be with you at all times—right in the “comfort” of your own home.

And it’s coming into your workplace on the cheap. Wavecrest Computing, a leading workplace surveillance company, charges customers a couple of dollars per employee for a yearly subscription to its surveillance software.

Whereas real human monitors cost real money, a company can now monitor the productivity of up to 1,000 workers for $2,000 a year. In other words, the company can keep you in check for a buck.

Wavecrest prides itself on monitoring human liability problems like “productivity loss” and “unnecessary costs,” tackling the one aspect they believe is plaguing all of work from home: ”human online activity.”

Wavecrest is just one company in a sea of others that sell this type of software. Since 2018, the online database Coworker has compiled a list of about 550 tech companies that sell monitoring products, from artificial intelligence technologies to biometric tracking.

Since the COVID-19 pandemic foisted telecommuting on the world, employers have fretted that employees may take advantage of working from home to do anything but work. Now, companies that purchase this software are obsessing unnecessarily over whether their employees are scrolling through social media on the clock or taking an extra long “bathroom break” to finish up household chores.

Records obtained by the Daily Dot reveal the scope that the software has penetrated government agencies with its cheap entry costs and ability to monitor anything from online gambling use to employee productivity.

The Daily Dot sent out dozens of Freedom of Information Act requests to local government agencies that have purchased software from Wavecrest Computing. Documents obtained during this process highlight the ease of employing this software.

Bossware by the numbers

For agencies that fear unproductivity among at-home workers is a waste of money, cheap deals offered at Wavecrest can give them an omniscient look at their workers. These agencies can now get a spreadsheet that will, for example, list all 36,000 websites an employee visited in one month, sorted by whether the website was deemed “acceptable” and how much time they spent on it.

In the set of documents obtained by the Daily Dot, email correspondences between government employees with the City of Temple, Texas, and the company Wavecrest show the cost breakdown of this surveillance software.

For the City of Dublin, Ohio, the cost of purchasing a slightly updated version of this software after their $685 government discount was a mere $2,740 to monitor up to 1,000 employees.

At roughly $8 per employee for the entire year, the City of Fernandina Beach, Florida, can monitor about 250 employees.

The Daily Dot reached out to the City of Dublin for an interview. The city’s public affairs officer “politely declined.”

“The main reason for purchasing this software was to hold employees accountable for their internet usage during work hours and while using the city’s computer equipment,” said Alex Gibbs, public relations specialist for the City of Temple, in a statement to the Daily Dot.

Pricing for the software is based on number of employees, number of licenses purchased, and the duration of the license or subscription. However, if the customer is a government agency, it can expect a discount no less than 25% off.

Even before knowing the full scale that working from home would take, government agencies sought to monitor their employees. Wavecrest used the COVID-19 pandemic to push its product on governments suddenly reeling over concerns about teleworking.

Amped up by the pandemic, Wavecrest marketed its products as a key to surviving the “new normal” in a promotional message sent to its customers in the City of Fernandina Beach, Florida.

What bosses are watching

But how exactly do these products work? Just how invasive is bossware?

Cyfin and CyBlock, both surveillance softwares offered by Wavecrest, allow for “complete insight into internet and cloud activity,” according to the company’s website.

Gibbs confirmed that for the City of Temple, the software was “effective” in documenting “sites the employees visited and the duration of time spent” on those sites.

Detailed charts and graphs allow companies to see exactly where in the world wide web their employees actually are. Whether an employee is scrolling through Twitter or perusing the news, these software applications give detailed reports on user data.

Marketed on the Wavecrest website, customers can look at sample graphs that show data like what social media sites employees visit during work hours.

Tabled breakdowns of this data show how long employees spent on these sites and when they visited.

A user summary report obtained by the Daily Dot via FOIA request to Loveland, Colorado, highlighted categorized lists of sites that employees visited. Broken down into tabled charts, the data shows what types of sites are considered “acceptable” versus “unacceptable.”

Sites that are compartmentalized as “human resources” or “cloud infrastructure” are considered acceptable; sites labeled “gambling” were unacceptable. Sites grouped together as news, shopping, or social media were considered neutral.

“As an organization we believe in transparency,” said Dan Coldiron, chief information officer for the City of Loveland. “We … let employees know that’s just the nature of working for local government.”

According to Coldiron, every government employee is made aware of the usage of Wavecrest software. He gives presentations to new employees going to work for the city.

But, Coldiron said, employing this type of software is just a precautionary measure. He said the city uses the software for its “web filtering” capabilities to block sites that may be “malicious” or “inappropriate,” not to monitor employee productivity.

Coldiron mentioned, however, that the reports contained in the documents released to the Daily Dot were observing employee web usage, contradicting the claim.

“Some of the reports were run on specific employees and in general the full employee base where we were looking for specific types of views,” Coldiron said. “Not to go after any individual, but more to see what’s being used in our environment. You have to know some of that for compliance and for the security of the environment.”

Due to the increase in work-from-home opportunities, surveillance software has been a hot-button issue.

A 2022 survey of 1,250 American employers by the site Digital.com showed that six in 10 employers require some type of monitoring software for its remote workers.

“It’s insane,” said Dennis Consorte, analyst and consultant for Digital.com in an interview with the Daily Dot. “I believe that these companies are taking the wrong approach. When you tell people that you’re going to monitor their behavior in order to make decisions, you’re leading by fear.”

Over 78% of the employers surveyed stated that the main reason for surveillance software was to “better understand how employees are spending their time,” followed by 68% of employers looking to “ensure employees are working a full day.”

According to the data, a quarter of employees spent five or more hours during their work shift on nonproductive activities like scrolling through social media.

Consorte said, however, this is not necessarily a justified means of monitoring productivity.

“Instead of measuring the hours that people work, it’s much more effective to measure the value they produce,” Consorte said. “They’ll be judged not by how many minutes and hours everyday they’re working on a task, but by how effective the work they do is.”

The data did not say if the employers surveyed were a part of private or public companies.

Both Gibbs and Coldiron said that for either the City of Temple or the City Loveland, no employees were ever terminated as a result of using surveillance software.

Just as if someone’s boss were to glance over their shoulder at their office cubicle, your computer can essentially now do the same thing. But with bossware, you won’t hear the footsteps or sense their eye.

Now it’s always happening, which means that spare bedroom that was converted into an “at-home office” may just as well be the cubicle.

And it didn’t cost your boss anything to do.