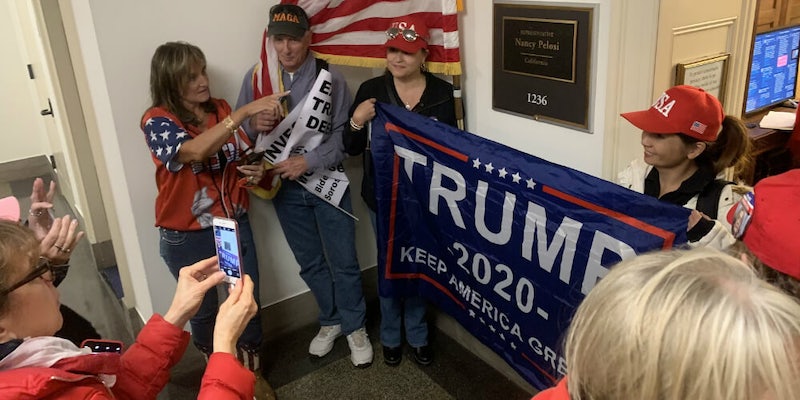 They also stormed offices, demanding to meet with Pelosi, Nadler, and Schiff.

Early Thursday morning, Women for America First, a pro-Trump women’s group, traveled to the nation’s capital to organize a rally and march in support of President Donald Trump.

Protesters took to the streets of Washington, D.C., before making it to the steps of the Capitol to protest the growing calls for impeachment from Democrats.

Tomorrow ”Women for America First” will be marching around D.C. & roaming the halls of the Capitol trying to find Pelosi, Schiff, & Nadler… pic.twitter.com/1tuOdzzC1t

Protesters told the Daily Dot that they were upset about what they claimed to be the “deep state” working against them. They alleged that buses were canceled due to their pro-Trump beliefs.

But as the Daily Beast reported, Joseph Heap, the chief marketing officer of US Coachways said it wasn’t a matter of political views, “but unfortunately, payment is required.”

Right-wing commentators such as Sebastian Gorka, Jack Posobiec, Matt Schlapp, and Will Chamberlain also took to the mic to speak in front of the boisterous crowd of around 150 people.

“Jerry Nadler will not breathe an easy breath when he attacks this president,” Collins declared to the crowd. “The Democrats want you to believe that they are doing something they’re not. All they are doing is trying to overturn your vote from 2016 … and you’re not going to let it happen.”

Congressman @RepDougCollins spoke at "March for Trump" accusing Nancy Pelosi of trying to "overthrow the votes" of Trump supporters with the impeachment inquiry into President Trump.

He led the crowd in multiple chants of "four more years!"

“We are witnesses to a coup. This is a coup, from John Brennan at the CIA to James Comey at the FBI–and all the way up to Obama,” Gorka exclaimed while speaking.

Surprisingly, at one point during the rally, House Speaker Rep. Nancy Pelosi (D-Calif.) was spotted on the Speaker’s Balcony, overlooking the rally.

I think I snagged an incredible shot here.

As hundreds of #MAGA activists gathered on the Capitol Lawn, I noticed @SpeakerPelosi watching from the balcony.

As she points them out to the folks she's talking to, I zoom out to show the crowd she's looking at. pic.twitter.com/A7c74OPAUV

Here’s the scene outside of Speaker Pelosi’s office: pic.twitter.com/G9niU7ATzZ

During the sit-in at Nadler’s office, which the Daily Dot attended, protesters demanded the interns let them meet with Pelosi and Nadler, while further scolding the interns for not allowing such meeting. They then began chanting, “Stop the Coup,” and “Four more years.”

Feeling bad for this intern… pic.twitter.com/7WoYCRJbvv

One of the protesters was wearing a “Stop the Coup” T-shirt and hounded Eleanor Holmes (D-D.C.) over the impeachment inquiry proposed by House Democrats.