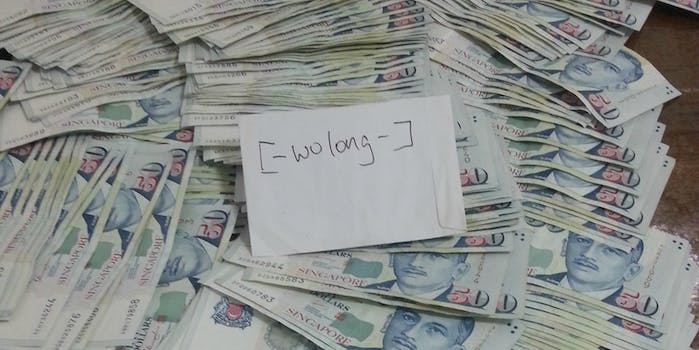 The Doge of Wall Street: How one trader controls the price of Dogecoin

Word of the Jamaican bobsled team’s successful Dogecoin fundraiser bounded across the Internet last weekend, providing a handy explanation for Dogecoin’s sudden rise in price over the following days. At its peak, Dogecoin was more than 400 percent more valuable than it had been the week before.

But closer inspection suggests someone else was pulling the strings.

Dogecoin is a virtual currency derived from Bitcoin’s source code and based on the popular Shibe meme, which stars a Shiba Inu dog covered in Comic Sans catchphrases. By design, Dogecoin is virtually indistinguishable from Bitcoin. It was created as a joke.

In a popular Dogecoin IRC channel last weekend, more than 500 people were frantically exchanging everything they could for dogecoins. Hundreds of lines of chat scrolled by too quickly to read, each prefixed with the same name: Wolong.

“Wolong” is the handle of someone who claimed to be an experienced hedge-fund manager from Singapore with sizeable Dogecoin holdings, some his own and some belonging to unspecified clients. His Dogecoin wallet—which he made no effort to hide, and is by no means assured to be his only one—contained close to 1 billion dogecoins. At the time of writing it was still increasing—at a rate of 10 million per transaction.

Wolong ignored my attempts to make contact, but he has not been shy publicly. Last Monday night, he gave regular updates to the channel as he made large Dogecoin trades, pushing the price of Dogecoin higher and higher.

A Bitcoin trader who asked to remain anonymous told me Wolong was likely trading mostly with himself, “playing the part of the fighting whales” (“whales” are traders with significant bankrolls). He described a pattern of trading where Wolong would make it appear that a whale was keeping the market below a certain price, and then play the part of a second whale buying enough Dogecoin to lift the price through the first whale’s resistance. Once the price broke that resistance, out-of-the-loop traders would buy more Dogecoin, hoping to see it rise even higher.

Schemers like Wolong are common on virtual currency exchanges, where there is so much fragmentation—some exchanges allow you to convert Bitcoin to and from more than 100 different altcoins, such as Dogecoin or Nyancoin—that most are valued at fractions of a bitcoin, and owning a significant percentage of the market is trivial. Traditional currency exchanges have strict regulations that put a stop to market manipulation, but cryptocurrency traders are left to police themselves.

As such, altcoin traders are on perpetual high alert for manipulation, and speculation runs wild in the community. Day-trading is inherently a psychological battle, and leaving inexperienced traders to conduct unregulated warfare can create dramatic fireworks.

Yesterday morning offered a perfect example of this, when the CEO of BitInstant, a now-defunct Bitcoin exchange, was arrested and charged with money laundering in connection with Silk Road. The Bitcoin community has vociferously downplayed the influence of illegal activity in Bitcoin’s popularity, so the arrest should have been good news. Instead, it triggered panic selling, bringing Bitcoin’s value down almost $100.

It took steadier hands to stem the flow, and a slow recovery is now afoot. The Dogecoin community has largely chosen to fight back instead of panic. When Wolong tried to take his scheming private, away from the noisy chatter of small players, many of his followers immediately abandoned him. Others founded competing groups of whales with the purpose of counteracting Wolong’s manipulation. When 4chan, the Internet’s most notorious messageboard, inevitably found out, they got to work making sure none of Wolong’s private coordination stayed private.

This vigilance in the absence of regulation might be cryptocurrency’s biggest strength. The community has rallied around Dogecoin, and Wolong’s power has diminished considerably. As a result, Dogecoin’s price has stabilized for now.

But Wolong will need to sell his Dogecoin eventually. And when he does? Over the cliff we go.