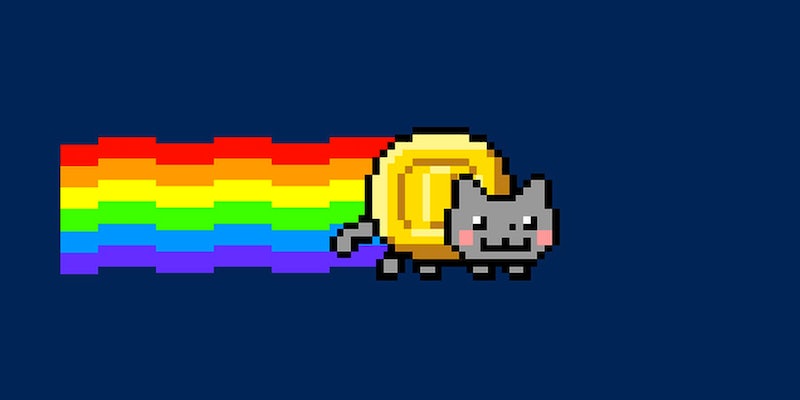 The battle over Nyancoin: How a cat meme inspired a cryptocurrency war

After a contentious beginning, Nyancoin is here. Will it soar like Dogecoin or flame out like Coinye?

There is no plot or purpose to Nyan Cat. It’s just a weird little cat animation bopping along to a song, and the beauty is in the silliness. The drawing of a Pop Tart with a kitten head doesn’t stand for anything. But the aggressively goofy meme is now a mascot for a pocket of the growing world of cryptocurrency, and the ability to use Nyan Cat as a talisman for a movement inspired a fight between two teams of earnest cryptocurrency enthusiasts.

The kinetic digi-kitty, created by Chris Torres in 2011, is one of the Internet’s more enduring memes. Unlike viral icons that quickly dither into obscurity, the tiny psychedelic feline has maintained a strong fanbase for over three years, with a particularly passionate corner in the EDM world (Skrillex is a big fan).

But Ben Lashes, the meme manager (yes, that’s a job) who arranges Nyan Cat licensing, isn’t thinking about Skrillex when I speak to him on the phone. This cold afternoon, he’s hyped up about another music star. “I’m a big fan of Kanye,” says Lashes. “But with Coinye, he had this chance to be a hero to the Internet. He could’ve done something cool with it, or at least played along.”

Lashes is referencing Coinye, the short-lived Kanye West–inspired cryptocurrency that shut down after Mr. West filed a lawsuit. Lashes sees it as a cautionary tale very relevant to Nyan Cat, because he and Chris Torres are entering the world of digital currency. Unlike Kanye and his cease-and-stop-making-cryptocurrency lawsuit, the meme manager and meme maker are enthusiastically helping their novelty digital coin get a start.

Nyancoin, a loving homage to Nyan Cat, is the first “officially licensed” cryptocurrency—if that’s worth anything—and it’s the latest addition to the world of memecoin (digital currencies based on memes). And just because it has a lighthearted branding doesn’t mean it can’t become a player; Dogecoin, named after the Shiba Inu meme, is currently the seventh-most-valuable cryptocurrency.

But while the people behind Nyancoin don’t have to deal with the litigious wrath of an not-into-it Kanye, they’ve already dealt with an equally daunting obstacle: each other. Two unrelated groups arrived at the conclusion that the world needed a Nyan Cat–inspired alternative cryptocurrency, and they’ve already duked it out to establish themselves of the Holders of the Nyancoin. Both of these groups used Bitcoin forums to get their projects started, thoroughly confusing many people. And only one is left standing.

The two Nyancoins both debuted on the same day, but one of the coins had a much rougher reception, criticized in alt coin forums for having a premine, which in this case meant the creators mined a substantial amount of the available coin themselves before it was made public. This didn’t sit well with Torres.

In fact, it swayed him to choose one coin to endorse. “With all due respect to the other team and their attempts to get a Nyancoin up and running, it just didn’t seem very well put together for a variety of reasons; they hoarded 10% of all coins and tried to coax me into taking legal action against them,” Torres said. “Lots of users were complaining about the bad functionality, they even restarted the entire system setting all user-generated coins to zero. It was just not how I envisioned it working at all,” he explained.

One of the successful Nyancoin’s creators, thought that the unsuccessful Nyancoin’s 10 percent premine was one of its most glaring flaws, but not the only issue. “There were also many technical things wrong with the coin. They have disappeared now,” he wrote Daily Dot in an email.

The now-official Nyancoin may have triumphed over its competitor, but there’s still traces of the fight online. Someone angry at how things shook out is squatting on the Reddit forum r/NyanCoin; he’s forcing people who want to talk about the official Nyancoin to use a different subreddit, r/nyancoins. It’s obviously not that big of an inconvenience, but this forum-squatting is a reminder that tension remains.

And the successful Nyancoin, while it has a ways to go to catch up to Doge, is making progress establishing itself as a known alt coin. The creators hope that the brightly colored mascot and focus on giveaways and games will help Nyancoin gain fans who want their digital cryptocurrencies to have a sense of humor.

“Nyancoin takes the seriousness out of cryptocurrency, and our aim is to be the ‘fun’ version of Bitcoin,” Nick wrote. One of the ways the team plans to do that is to introduce a lighthearted way to mine. “We are currently working on new and fun ways to earn Nyancoin through fun games, so anyone will be able to earn Nyancoins even if they don’t have the hardware to mine.”

Torres is as optimistic about Nyancoin’s future as the coin’s creators, especially as a complement to Doge Coin. “I think Dogecoin and Nyancoin can coexist together easily on the web, and both can help each other out. Dogecoin has gotten off to an impressive start and I’m seeing the same dedication with Nyancoin,” he said, noting that fans have already created a seamless wallet.

To encourage adoption of the coin, Torres plans to soon accept the brand-new currency on his merchandise website, so fans can exchange their virtual NYANs for tangible Nyan Cat swag.

And there are already true believers, looking over forums at Reddit and Bitcoin Talk. Some enthusiasts even believe that the Nyancoin’s licensed branding and accessible, beginner-friendly attitude could make it the iPhone of alt coins, something that’s not technically superior but has the marketing finesse and ease of access to appeal to a wide range of people.

Meanwhile, this Twitter user is asking what the rest of us are thinking:

Nyancoin. HOW LONG BEFORE GOATSECOIN (not very long I’d guess).