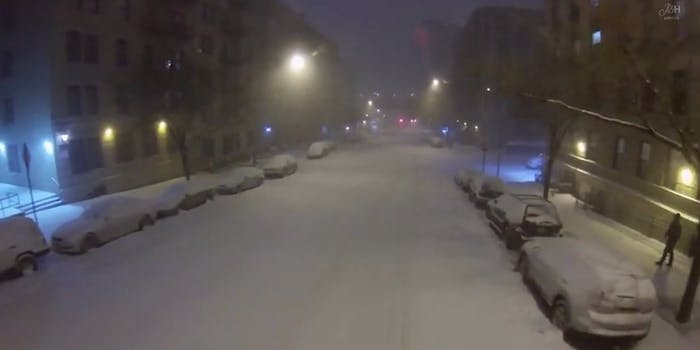 Gorgeous footage captures the pristine aftermath of the storm.

When Mother Nature is expected to drop several feet of snow on your doorstep, there’s really only one thing to do: Film it with a drone.

As Winter Storm Juno hit the Northeastern U.S. on Monday, people fired up their drones and cameras to catch some of the winter weather from the sky: the aftermath of pristine snow on streets left empty, along with parks blanketed in a dusty, white substance.

If you replace the original audio with music, the storm seems almost calm and majestic, as in Jonathan Harper’s video from the snowstorm in New York City.

When the footage is coupled with the noise of a howling wind, however, it makes you want to warm up with a cup of tea under the covers and avoid the outdoors at all costs.

One cameraman caught the aftermath with a Phantom DJI drone in New Jersey.

Drone photographers were out in the streets as well, including Alan Murray, editor at Fortune Magazine, who filmed the New York snowstorm. In a tweet, he said that 50-mile-per-hour winds made flying the device difficult.

Reporting on #blizzard2015 assisted by my drone… pic.twitter.com/U2d2yjlFYa