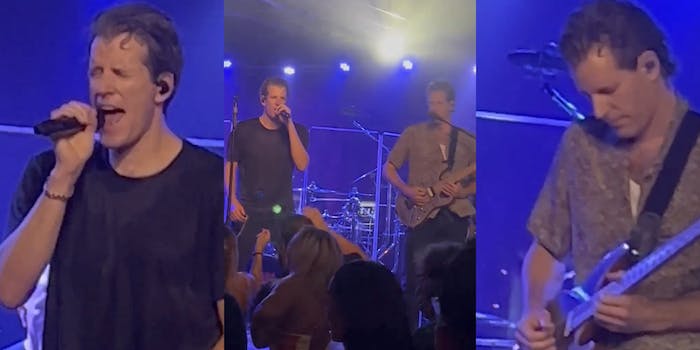 Cameron and Tyler Winklevoss—better known as the Winklevoss twins—have a band, apparently.

“uh so i saw the winklevoss twins’ band? tonight? like, it’s really them,” they wrote.

In the video, Tyler and Cameron can both be seen sporting their signature, slicked-back haircuts while they live out their middle-aged rockstar dreams. Tyler sings off-key and off-beat to Journey’s “Don’t Stop Believin’” while Cameron strums along on the guitar, full band behind them.

In the replies, the user pointed out that the twins are “literally billionaires” and said it was “it’s by far one of the strangest and most tragically hilarious/infuriating things I’ve ever witnessed”

In a separate set of videos posted by user @Sculliosis, the twins can be seen covering Rage Against the Machine and the Red Hot Chili Peppers at Bottle & Cork in Dewey Beach, Delaware.

The twins can once again be seen singing off-key, clad in printed button-ups and skin-tight black skinny jeans with chains on their belt loops.

The irony of two billionaires who rose to fame over a Facebook lawsuit and a crypto company singing a song by an anti-government, anti-billionaire band was not lost on Twitter users. Tyler couldn’t even put his whole chest into the iconic “huh” at the end of the first verse of Rage’s “Killing in the Name.”

“Zak de LA Rocha, still alive, dies so that he can spin in his grave with appropriate venom,” one user wrote.

“This motherfucker covers Rage and doesn’t even put his back into the ‘H-UUUUH!’?! The gall,” said another.

This may have been a way to blow off steam for the Winklevoss twins, who have had a rough month following the crypto markets decline. Earlier this month, the Winklevoss twins joined a laundry list of crypto exchanges and companies that laid off employees or implemented hiring freezes as markets take a downturn.

Users were quick to take digs at the post-layoff jam sessions.

“the bear market hit the winklevoss twins so hard they’re singing at dive bars for 50 bucks,” said one.