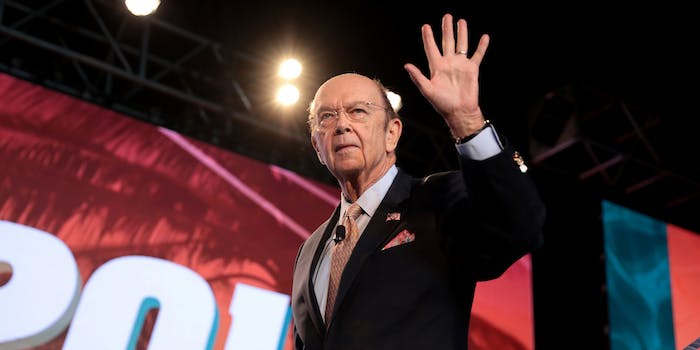 Commerce Secretary Wilbur Ross said he doesn’t “understand” why federal workers who have not been paid because of the partial government shutdown have been getting food from shelters or food banks.

Ross made the comment while speaking with CNBC, and also explained that the thousands of workers who have gone without paychecks amid the longest government shutdown in U.S. history only represented a small portion of the country’s GDP.

President Donald Trump‘s commerce secretary explained that the unpaid federal workers should take out loans to cover their time without pay.

“I know they are, and I don’t really quite understand why,” Ross said in regards to workers getting food at shelters, as Roll Call notes. “Because, as I mentioned before, the obligations that they would undertake, say borrowing from a bank or a credit union, are in effect federally guaranteed. So the 30 days of pay that some people will be out, there is no real reason why they shouldn’t be able to get a loan against it.”

He also said that the number of workers furloughed were only a small portion of the country’s overall economy.

. @CommerceGov Secretary Wilbur Ross on federal workers going to homeless shelters for food during #shutdown: “Well I know they are and I don't really quite understand why” suggesting gov't employees take out loans through banks or credit unions pic.twitter.com/QFs4UySNcH

The comments from the commerce secretary were not taken well online.

Ross isn’t the only person in the president’s orbit who have been criticized for their comments about the affected workers. Lara Trump, the president’s daughter-in-law, called the lack of paychecks a “sacrifice.”

Many government employees are continuing to work without pay, and some are not allowed to work during the #governmentshutdown. @LaraLeaTrump wants these citizens to know that their sacrifice is not in vain. pic.twitter.com/royaX1Roy0

“This is so much bigger than any one person, it is a little bit of pain, but it is going to be for the future of our country,” she said in an interview with BoldTV.

“Their children and their grandchildren and generations after them will thank them for their sacrifice right now. I know its hard, I know people have families, they have bills to pay, they have mortgages, they have rents that are due. But the president is trying every single day to come up with a good solution here.  The reality is, its been something that has gone on for too long and been unaddressed–our immigration problem.”

She added that the affected workers should “stay strong.”