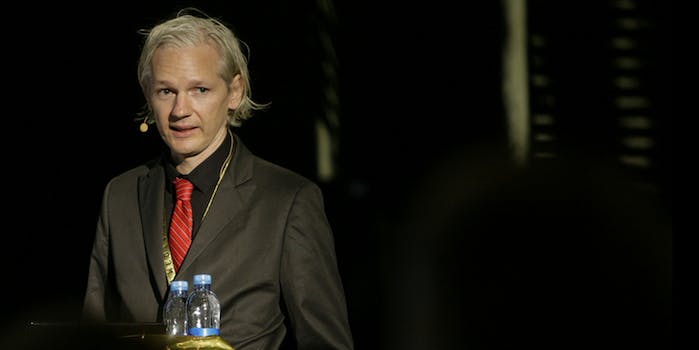 Does WikiLeaks have the Snowden files?

Wikileaks promises to release information about U.S. spying that could spark violence.

For those who don’t follow with breathless anticipation the latest revelations about U.S. intelligence-gathering operations, it might be easy to conflate the personalities of Julian Assange, Glenn Greenwald and Edward Snowden.

All three men have a lot in common. They all currently live abroad after revealing shocking information about the scope of the American intelligence community post-9/11. All three are championed by privacy and human rights advocates while being generally scorned by military and intelligence officials. And all three have communicated and expressed respect for one another.

But there has always been a key difference between journalist Greenwald and former National Security Agency (NSA) contractor Snowden, and WikiLeaks founder Assange. Though Snowden absconded with thousands of NSA documents a year ago, the information contained within those documents has been judiciously meted out over the past 12 months in reports by Greenwald and other journalists. WikiLeaks, on the other hand, has traditionally favored mass document dumps that put everything out their at once.

Now, it appears these two different approaches have come into direct conflict as WikiLeaks threatens to reveal a potentially dangerous detail that Greenwald and his colleagues recently chose to redact.

On Monday, the Intercept, the news site founded by Greenwald and others, published a new report detailing how the NSA is able to monitor the telephone communications of entire nations. Greenwald, along with coauthors Ryan Devereaux and Laura Poitras, expanded on an earlier Washington Post report about MYSTIC, an NSA program contained within the Snowden leaks, that can record the cellphone metadata of an entire country for up to 30 days.

The Intercept reports that MYSTIC is already in use in five nations: Mexico, the Philippines, Kenya, the Bahamas, and an unnamed country. Furthermore, Greenwald and his colleagues write, there is program within MYSTIC that can record all the voice conversations of an entire country and store those as well. That program, named SOMALGET, is already at work in the Bahamas and the unnamed nation as well.

The Intercept chose deliberately to leave one of the five nations unidentified, citing “credible concerns that doing so could lead to increased violence.”

But in surprising turn of events, WikiLeaks tweeted Monday night that it knew the identity of the unknown company and planned to reveal it within 72 hours.

@GGreenwald @johnjcook We will reveal the name of the censored country whose population is being mass recorded in 72 hours.

Not only does the identity of the country promise to be a major revelation, but WikiLeaks’s claim to have such information is also a stunning turn of events. It suggest that WikiLeaks has somehow gotten ahold of Snowden’s documents, a closely guarded cache of secret government information only known to be held by a select few.

WikiLeaks faced an immediate torrent of criticism for its threats to release the information and potentially spark violence. But the defiant and ideological organization said the country in question has a right to be violent.

If a nation wants to engage in a revolt on the basis that the US government is recording all their phone calls, that is their right.

Until WikiLeaks makes good on its promise, there is no way to tell which other country SOMALGET has been inflicted upon. What is known though is that in the Bahamas, the NSA monitored entire networks by partnering with the Drug Enforcement Agency to locate “international narcotics traffickers and special-interest alien smugglers.” The Intercept writers suggest this is more than overkill given that the Bahamas don’t pose a significant security threat to the U.S. outside of crimes related to drug trafficking. The State Department’s own assessment speaks to that effect.

According to Time, an NSA spokesperson did not deny the existence of SOMALGET and MYSTIC.

“The fact that the U.S. government works with other nations, under specific and regulated conditions, mutually strengthens the security of all,” the spokesperson said.