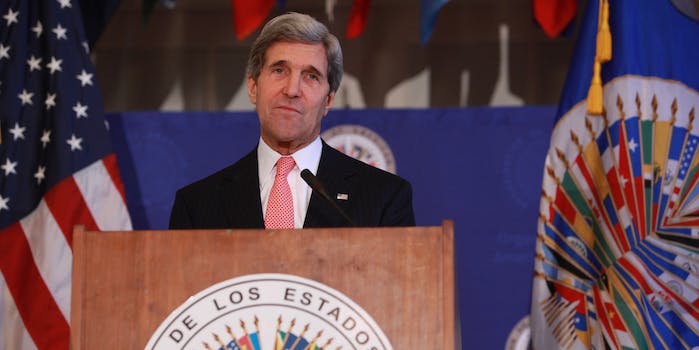 'Reports that Secretary Kerry had conversations with Ecuadorian officials about this are simply untrue. Period.'

The U.S. Department of State on Tuesday refuted claims by WikiLeaks that Secretary of State John Kerry orchestrated the severing of Julian Assange’s internet connection in an effort to silence the publication.

“While our concerns about Wikileaks are longstanding, any suggestion that Secretary Kerry or the State Department were involved in shutting down Wikileaks is false,” a spokesman told the Daily Dot in an email. “Reports that Secretary Kerry had conversations with Ecuadorian officials about this are simply untrue. Period.”

Assange currently lives at Ecuador’s embassy in London under the protection of political asylum, which he obtained in August 2012 over fears of a U.S. espionage investigation into the WikiLeaks founder.

The John Kerry private meeting with Ecuador was made on the sidelines of the negotiations which took place pricipally on Sep 26 in Colombia.

Kerry did travel to Colombia on Sept. 26 for the signing of a peace deal between the Colombian government and the Revolutionary Armed Forces of Colombia (FARC), according to the State Department. Ecuador’s attorney general, Galo Chiriboga, praised the deal as an “historic achievement.”

WikiLeaks did not immediately respond to a request for comment on the State Department’s denial.

WikiLeaks tweeted on Monday that Assange’s internet connection had been “intentionally severed by a state party.” It later said Ecuador was the state actor that cut Assange’s connection.

Assange’s internet woes come amid the ongoing publication of emails stolen from John Podesta, chairman of the Clinton campaign. The Clinton campaign has blamed the theft of Podesta’s emails on Russian hackers, a claim the FBI suspects may be true. WikiLeaks has pushed back against any notion that the Russian government is its source.