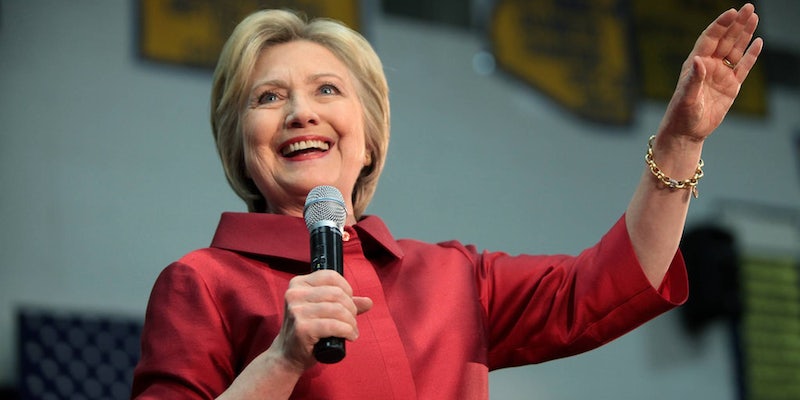 Why does the internet hate Hillary Clinton?

From B-E-N-G-H-A-Z-I memes to the #MoreTrustedThanHillary hashtag, the internet has plenty of hate for Hillary Clinton.

Public displays of dislike for the presumptive Democratic nominee for president are made even more possible (and creative) by the internet’s fluid, remix culture. Of course, Clinton hatred has its roots in the pre-internet days. Few presidential candidates have been in the public eye for as long or held such a diverse array of roles, which is why her supporters call her the most qualified candidate to ever run for president.

A former secretary of state, Clinton also served as senator of New York for eight years, more than twice the period of time President Barack Obama spent in Congress. No other presidential candidate has also served as first lady, which she did when her husband, former President Bill Clinton, served through most of the 1990s. She headed the national task force on health care reform—among the most complex issues tackled by any first lady in history—while in the Clinton White House. And she was also first lady of Arkansas when her husband served as governor of the state.

So, she’s had a long time to cement in the American consciousness. But exactly why is it that people dislike Clinton?

During all the time in the limelight, Clinton inspired a lot of animosity. Here’s why, at least right now.

1) Benghazi and those ‘damn emails’

Few scandals have encapsulated a presidential campaign like Benghazi has.

While Trump seems to have a mini-scandal a minute, Clinton’s handling of her classified emails while secretary of state—itself a scandal within an alleged scandal that began after the Republican’s Benghazi inquiry discovered her private email use—is the sole focus of countless congressional hearings, an entire House special committee, and numerous investigations by the executive branch. Not to mention extensive coverage by the media and the conversations that produces.

Further, many have long claimed Clinton lied about the reasons behind the Sept. 11, 2012, attack on a U.S. consulate in Benghazi, Libya—which left four Americans dead, including U.S. Ambassador J. Christopher Stevens—and, along with others in the Obama administration, otherwise misled the public in the aftermath.

Throughout all of the outrage and hubbub over Clinton’s “damn emails,” as Democratic challenger Sen. Bernie Sanders (I-Vt.) famously called them, Conservative Twitter has remained positively teeming with Benghazi analysis. The FBI‘s recommendation that the DOJ drop an investigation related to Clinton’s emails only added fuel to the fire.

Benghazi has dominated the nearly four years of congressional hearings and concurrent investigations by the FBI, State Department, and Department of Justice. This month’s conclusion of the Department of Justice’s criminal investigation into Clinton’s mishandling of classified material over her private email set-up, which resulted in no charges, has only raised new questions about Clinton’s suitability for office.

While FBI Director James Comey‘s testimony to Congress was meant to justify why the federal government should halt its probe into Clinton’s email, his final assessment of Clinton was pretty damning.

“I see evidence of great carelessness,” Comey told the House Oversight and Government Reform Committee earlier this month. “But I do not see evidence that is sufficient to establish that Secretary Clinton or those with whom she was corresponding both talked about classified information on email and knew when they were doing it, that it was against the law.”

While criminal charges are no longer at play, the ongoing saga over Clinton’s email will still continue. The State Department re-opened a less consequential inquiry into how Clinton and her staff handled classified information during her four-year tenure as agency head.

Despite a favorable conclusion for Clinton, two recent polls indicate that the federal government’s investigation into Benghazi has harmed the candidate, at least in the short-term. An ABC News/Washington Post poll on Monday indicates that more than half of Americans (56 percent) disagree with FBI investigators finding no fault with Clinton’s handling of her emails while secretary of state. Another New York Times/CBS poll released around the same time found that 67 percent of voters believe that Clinton is not trustworthy—a 5 percent increase from June, before the FBI released its findings.

Indeed, Politifact, the Pulitzer Prize-winning fact-checking outlet, found that multiple statements Clinton made about her use of email were entirely false—and that’s not the only topic on which Clinton has fallen over the wrong side of the truth.

Within the warped bubble of the 2016 election, however, the numbers are in Clinton’s favor. Politifact, the Pulitzer Prize-winning fact-check outlet, gives Clinton a far better score than her Republican challenger, Donald Trump. Of the 223 Clinton statements Politifact has investigated, 27 percent ranked either “mostly false,” “false,” or “pants on fire.” Of Trump’s statements, the ratio was flipped—76 percent fell into one of those three categories of false, and just 3 percent of the 181 statements Politifact checked out were found to be wholly “true,” compared to 23 percent for Clinton.

Then there’s Clinton’s online defenders—trolls, critics might call them—who respond to internet chatter with pro-Clinton messaging, presumably without identifying themselves. A reported $1 million paid by Correct the Record, a super PAC devoted to achieving a Clinton victory, went to an “army” of “former reporters, bloggers, public affairs specialists, designers” and others whose job it is to play up Clinton’s credentials and background. This method profoundly misunderstand’s the internet’s credos of transparency and authenticity (see more below).

Of course, the lies anyone tells do not equal one another—and that’s a big reason this remains an issue.

Clinton’s never been genuine enough for some voters. Her “authenticity problem” got so bad, her campaign devised a plan to tackle it head on by being more spontaneous. Of course, the plan backfired—how does one plan to be spontaneous? Stephen Colbert even ended up mocking the Clinton campaign’s authenticity campaign in a sketch.

“Yes, Ms. Clinton is clearly qualified for the office, but to be elected is not enough. You have to appear genuine,” riffed Colbert. “If only there was some way we could get a glimpse into the private side of Hillary Clinton. I don’t know—read her emails or something?”

The inability of America’s heartland to relate to a woman of her background, credentials, or public demeanor is a recurring obstacle in Clinton’s contentious career. It’s not because of any lack of effort to seem like the girl next door. While campaigning with her husband during his run for governor of Arkansas, she even began to speak in a noticeable Southern drawl.

In one NBC interview  from 1993 as first lady, she chatted with Katie Couric about housekeeping and daughter Chelsea’s love for scrambled eggs. As Walter Goodman remarked in the New York Times in 1993, such a personality shift in the NBC interview was a reflection of Clinton playing for a certain audience:

Tonight’s interview can be understood as an effort by [Clinton] administration damage controllers to allay people’s discomfort, even in these post-feminist times, with a first lady whose concerns are plainly more in the Oval Office than in the living quarters of her new house. On show here, despite intimations of larger ambitions, is a homebody who is worrying about the wear and tear on the White House upholstery.

In short, Clinton’s struggle over the years to appear “authentic” to portions of America are both a symptom of her embattled politics and a problem in itself—one she’s yet to overcome.

Whether it’s due to Clinton herself, her husband, or the massive reach of the well-funded Clinton Foundation, one thing is apparent: The Clinton name is powerful.

The Clintons have drawn millions in donations and the interest of powerful figures from all over the world and across virtually every industry.

Such power has drawn backlash. Republican politicians and political commentators accused the Clintons of thinking they’re immune from justice—a claim bolstered by Clinton escaping charges related to her mishandling of classified material during her time as secretary of state.

How people react to Clinton’s gender and potential to become the first female U.S. president have colored both her runs for the Oval Office. Even before Trump accused Clinton of playing the woman card, many, many others launched the same criticism at her presidential campaign.

The internet is already unkind to women and critical of politicians, so Clinton’s joint status has only exacerbated that effect.

HRC repeats token line: "If fighting for women and children is playing the woman card, then DEAL ME IN," POTUS and crowd cheers "Hillary"

If Hillary Clinton is truly for gender "equality," then why does she always have to play the women card? pic.twitter.com/URYq5mH1VS

If Hillary plays the 'woman card,' then it's fair game us to beat her with that same card.
Real women don't whine.#WomenForTrump

All that being said, Americans are far more comfortable with the idea of a woman president in the 21st century than they have been in the past one. A total of 88 percent of Americans said they would vote for a woman president if their party nominated one, according to a 2007 Gallup poll. That number has remained roughly the same over the past nine years. A 2016 CNN/ORC poll found eight in 10 Americans think the country is ready for its first female president.

As Anna Quindlen put it in a 1993 op-ed in the New York Times, trashing Clinton was trendy. It still is—more than two decades later.

Trashing Hillary Rodham Clinton’s reconstituted name has been all the rage since her husband took office and she took off as a power player in Washington. The standard gripe is that the First Woman is a monogram chameleon, tailoring what she’s called to suit what she wants.

The reasons behind the Clinton hatred back then are not radically different from today. Benghazi and “Emailgate” are new additions to the mix, but as Quindlen noted, the American public’s discomfort with Clinton was due to the fact that she didn’t fit the mold of how women should behave. The public’s obsession with Clinton’s “identity” was proof of this.

Criticisms of Clinton’s lack of “authenticity,” her ambitiousness, and her insider status have followed her through every office she’s held in her political career—something her supporters will say is a result of America’s inherent biases and her critics claim as evidence they are right.