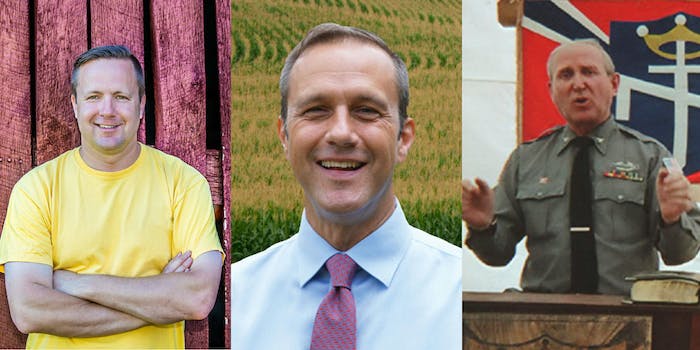 Who are the white nationalists running for office in 2018?

Once relegated to the fringes of society, white nationalists have been emboldened by the nationalist sentiments that have cursed through Donald Trump’s presidency.

Now they are publicly running for office and, in some cases, winning races.

The majority of them have run under a loose affiliation with the Republican party, despite efforts by the GOP to distance itself from far-right groups and figureheads. But it’s not just Republicans who are the have members flirting with the fringe views. One alt-right associated candidate is even running as a Democrat.

Though it is only a handful of candidates across the country who are attempting bring white supremacy to government, the fact that these candidates have felt safe enough to publicly push their ideology shows how much the dialogue has shifted in the age of Trump.

Here are the six most infamous candidates for public office who have espoused hate-filled rhetoric.

A self-proclaimed Holocaust denier and former member of the American Nazi Party, Arthur Jones emerged victorious in Illinois’ 3rd Congressional District in an uncontested primary. Jones will face Democratic incumbent Rep. Daniel Lipinski in the November general election. The district, which includes portions of Chicago and the city’s suburbs, is one of the country’s safest Democratic seats.

After seeking the nomination unsuccessfully five times before, even Jones was surprised he won. “Even if only myself and my wife voted for me, I’d win the primary because the Republican party screwed up big time,” Jones said in an interview.

For their part, Republicans on a state and national level have denounced Jones, asking voters to skip over his name on the ballot line. The Illinois State GOP plans to run an independent candidate in the general election.

The brand of bigotry that Corey Stewart is selling is apparently more palatable to the Republican Party. Despite Stewart’s ties to pro-Confederacy causes and the Unite the Right Rally in Charlottesville, where Nazis marched in protest and left-wing activist Heather Heyer was killed, he enjoys the support of the state Republican Party and was congratulated by President Trump after his primary win.

On YouTube, you can find a video of Stewart at the 2017 Old South Ball in Danville, Virginia, where he gave a speech that included the line that the Confederate Flag “is our heritage, it’s what makes us Virginia, and if you take that away, we lose our identity.”

Stewart has compared taking down Confederate monuments to ISIS on Twitter and made preserving those monuments a part of his Senate campaign. He also appeared with Unite the Right organizer Jason Kessler at an event several months after the events in Charlottesville.

Politicians who are for destroying the statues, monuments and other artifacts of history are just like ISIS. pic.twitter.com/qoGYGe1l5S

He also is a proud supporter of Paul Nehlen’s House campaign. Nehlen spouts some of the web’s most racist and anti-Semitic vitriol, but Stewart once called him a “hero.”

The August primary contest to replace Rep. Paul Ryan (R-Wisc.) will be hotly contested, with six candidates currently in the race. The winner will likely face progressive favorite Randy “Ironstache” Bryce in the November general election. The candidate who has gotten the most national attention in the crowded Republican field is avowed white supremacist Paul Nehlen.

Nehlen is a darling of the alt-right, who was deemed too right-wing for Breitbart when the website cut ties with him last year. Some of Nehlen’s racist antics include tweeting out an insulting photo of Meghan Markle and Prince Harry, participating in an “It’s okay to be white” campaign on social media, and suggesting that the United States have a “discussion” about whether to allow Muslims into America at all.

Nehlen lost to Ryan by 68 points in 2016, so if he makes it out of the primary, it will be in large part due to the number of contestants in the field. However, no clear favorite has yet emerged on the Republican side of the race.

Twenty-two-year-old James Allsup became one of America’s few explicitly white nationalist office holders when he won a local election in June. Allsup marched with white supremacist hate group Identity Evropa at the Unite the Right rally last year and is active in the group’s work in the Pacific Northwest. Though he was pressured to step down as president of the Washington State University College Republicans after the rally, he still harbors political aspirations.

Unlike the other candidates on this list, Allsup didn’t have to beat out any other candidates for his post. By state rules, Allsup became the Whitman County precinct committee officer for the Washington Republican Party after his candidacy remained uncontested for four days.

The RNC has denounced Allsup, saying, “There’s no place for [his views] in the Republican Party.”

Allsup has appeared on white nationalist podcasts to encourage other Identity Evropa members—and those sympathetic to their cause—to take a look at getting involved in local Republican politics.

Steve Smith was elected to the Republican committee in Luzerne County, Pennsylvania, in 2012, when he ran uncontested. In 2016, he won re-election with 69 of the 73 votes cast.

Smith shared news of his victory on Stormfront, a well-known white supremacist website. Active in various white nationalist groups since the 1990s, Smith is the founder of Keystone United, a Pennsylvania based skinhead group.

He was arrested in March 2003 for beating Antoni Williams, a Black man, with stones and chunks of pavement. After pleading guilty to terrorist threats and ethnic intimidation, he received a two-month sentence.

In a shocking story broken by Slate’s Osita Nwanevu, it was revealed that the Rhode Island Democratic Party endorsed a candidate with connections to the far-right over the progressive incumbent. On June 28, the Rhode Island Democratic Party endorsed Michael Earnhart over incumbent Moira Jayne Walsh in what looks like a last-minute, handwritten addition to a list of endorsements by the state committee.

Slate did some digging into Earnheart’s past and came up with some disturbing details. On an archived version of his Twitter page, the site discovered retweets of figures like Laura Loomer, Mike Cernovich, and Proud Boys founder Gavin McInnes, all thought leaders in far-right communities online.

The endorsement is viewed by many in local politics as retribution for Walsh’s breaks with party orthodoxy.

Though each individual white nationalist on the ballot or in office can be explained away as a long shot to win or as holding an inconsequential office, the number of white supremacists on ballots across the country is staggering.

It’s clear some have felt emboldened by Trump and his nationalist movement. Their performance in the coming months will show whether they were right to think that with a new president in the White House, there might be room for their views in the mainstream.