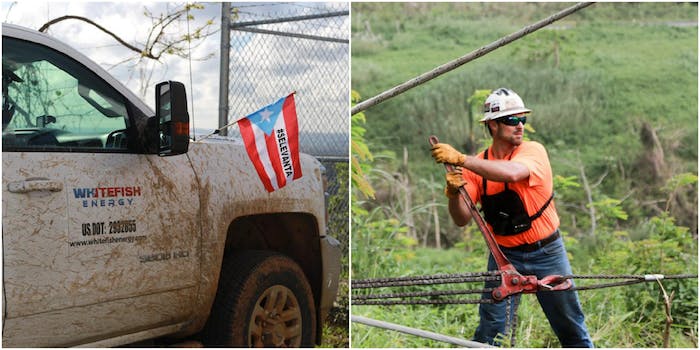 A small electricity company from Montana has been awarded a $300 million contract to restore power to hurricane-ravaged Puerto Rico, raising questions about the firm’s ties to President Donald Trump and a key member of his cabinet.

“Working side-by-side with the engineering team of PREPA, Whitefish Energy has already repaired several miles of key transmission and distribution lines, bringing the team within days of energizing and restoring power to multiple Puerto Rico towns and communities,” the company said in a statement (emphasis theirs). “Consistent with Puerto Rico Governor Ricardo Rosselló’s plan, Whitefish Energy is committed to restoring power to 100 percent of the island, and ensuring Puerto Rico has an improved, resilient electrical grid.”

Whitefish Energy also promised to provide regular updates on its progress. The company has posted new information on its Facebook page over the past month, sometimes posting multiple updates a day, including photos and videos.

Our #WhitefishEnergy crew making progress on poles and lines in #Bucaré!

Most of the comments on the company’s Facebook page are positive, with commenters thanking Whitefish Energy for its work.

Whitefish Energy said it has 300 employees working to restore electricity to Puerto Rico. The Washington Post reports that the company employed just two full-time workers when Hurricane Maria hit Puerto Rico on Sept. 20. According to the Post, the largest deal Whitefish Energy received before landing in Puerto Rico was a $1.3 million contract to replace nearly five miles of transmission lines in Arizona.

The company says its experience working in mountainous terrain makes it well-suited for working in Puerto Rico’s geography.

Whitefish CEO Andy Techmanski says he knows Zinke but only in the context of living in a small town where “everybody knows everybody,” the Post reports.

However, Whitefish’s ties to the Trump administration go deeper than mere small-town niceties. A Daily Beast investigation found that the company is primarily funded by HBC Investments, whose founder and general partner, Joe Colonnetta, contributed generously to Trump’s presidential campaign.

Federal Elections Commission records show that in 2016 Colonnetta contributed the maximum allowed donation ($2,700) to both Trump’s primary and general election campaigns, $20,000 to the Trump Victory PAC, and $30,700 to the Republican National Committee.

As of Tuesday morning, 34 days after Hurricane Maria made landfall on the Caribbean island, 75 percent of residents remain without power and 25 percent lack access to running water, according to Puerto Rico’s government. The U.S. Army Corps of Engineers says some 80 percent of the island’s 2,400 miles of transmission lines and 30,000 miles of distribution lines suffered damage as a result of the hurricane.