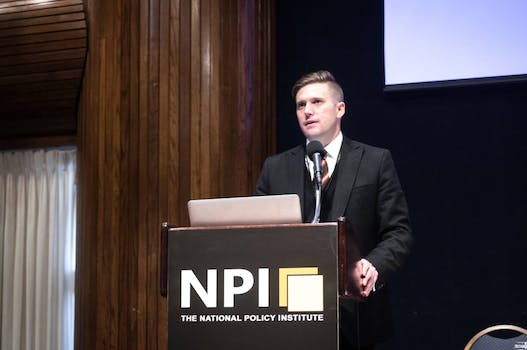 Richard B. Spencer, the president on the National Policy Institute, is well known for his Donald Trump support and white nationalism. He’s carved a niche as an academic, palatable pundit—but the same can’t be said about his supporters.

“Hail Trump, hail our people, hail victory!” he said to his supporters after a speech Saturday, many of whom replied with Nazi salutes.

The annual National Policy Institute conference housed over 200 attendees at the Ronald Reagan Building in Washington, D.C. Describing itself as “an independent organization dedicated to the heritage, identity, and future of people of European descent in the United States, and around the world,” the National Policy Institute serves the alt-right community and regularly holds public events and conferences.

“America was until this past generation a white country designed for ourselves and our posterity,” Spencer said to his supporters. “It is our creation, it is our inheritance, and it belongs to us.”

Topics ranging from creating a new society and peaceful ethnic cleansing soon took a more white-supremacist turn when Spencer referred to mainstream media as “Lügenpresse,” a termed used by Nazi Germany to describe hatred toward critics in the press.

Parts of Spencer’s speech can be seen in this video from the Atlantic.