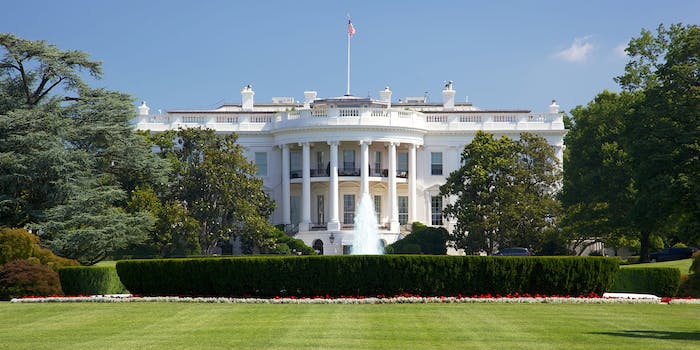 The spin is flying.

The outgoing voicemail message at the White House has been changed to blame the Democratic Party for the ongoing government shutdown. According to reports from several outlets, calls to the White House comment line go unanswered; then a message plays accusing the Democrats of holding the military “hostage” amid negotiations over immigration.

“Thank you for calling the White House,” the message says, as detailed by The Hill. “Unfortunately, we cannot answer your call today because congressional Democrats are holding government funding, including funding for our troops and other national security priorities, hostage to an unrelated immigration debate.”

saw this going around and wanted to check for myself: here’s the message you hear today when you ring the White House comment line during the shutdown pic.twitter.com/sCquYj0XnX

The message then advises callers to leave their comments on the White House website.

The government shutdown began at midnight local time on Saturday morning after Congress failed to come to an agreement on passing a continuing resolution to fund the government. The GOP is currently attempting to force the Democrats to accept its terms on the immigration debate, including on the Obama administration-era DACA program, the visa lottery system, and the construction of a wall along the southern border with Mexico.

The Democrats are attempting to secure protections for DACA recipients. Senate Majority Leader Mitch McConnell has also attempted to use the funding of the children’s health insurance program as a bargaining chip; the program was not renewed last year, imperiling the health insurance of approximately 9 million children.

The shutdown has spurred feverish efforts on both sides to define who’s to blame. President Donald Trump himself has branded it the “Schumer Shutdown,” while Democrats have framed it as the “Trump shutdown”—the Twitter trends showed that many people believed the latter.

Notably, it’s the first time that a government shutdown has occurred when one party has controlled the House, Senate, and the presidency. It remains to be seen if and when both sides of the aisle will agree to a deal to end the shutdown.