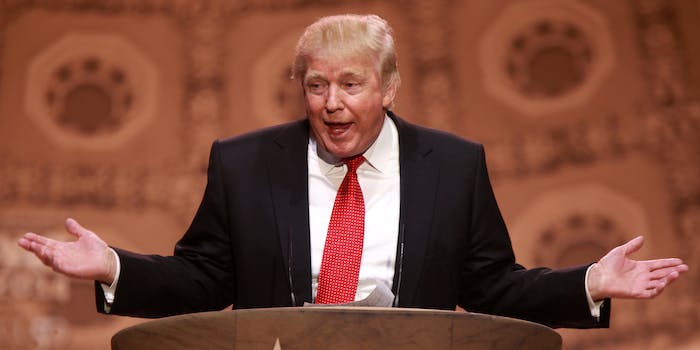 Trump’s team removes all old, pending ‘We the People’ petitions

President Donald Trump took the oath of office at noon and his staff wasted no time assuming control of the official White House website.

In addition to scrubbing any mention of LGBT rights, climate change, and Obamacare from whitehouse.gov, the Trump administration has decided to archive all petitions, including those in progress, from the We the People website, a petitioning system established under the Obama administration in September 2011.

It’s unclear whether Trump’s advisors will make a tradition of publicly responding to petitions from the American people—under the current rules of the site, petitions reaching 100,000 signatures within 30 days warrant an official response—but, as of writing, two new petitions have already been created and they are quickly amassing support.

Neither of the petitions are likely to be popular among Trump’s staff.

The first petition calls on the new president to immediately release his tax returns, something Trump has adamantly refused to do. (Every major presidential candidate since 1976, including Trump rival Hillary Clinton, have released their tax returns to the public.) Trump has faced fierce criticism for being secretive about his finances, in addition to allegations that he may be attempting to conceal business ties between the Trump Organization and Moscow.

The petition, which collected several thousand signatures within hours, reads in full: “The unprecedented economic conflicts of this administration need to be visible to the American people, including any pertinent documentation which can reveal the foreign influences and financial interests which may put Donald Trump in conflict with the emoluments clause of the Constitution.”

The second petition calls on the president to fully divest himself from his private business interests. Trump enters the White House on Friday with numerous conflicts of interest, which he has essentially refused to resolve, citing the fact that there’s no law requiring him to do so. “The law is totally on my side,” Trump said following the election, “meaning the president can’t have a conflict of interest.”

While he has turned control of his company over to his children, Trump will retain ownership of his corporation throughout his presidency, which—regardless of what the law—creates numerous geo-political conflicts.

As Mother Jones notes, Trump owes Germany’s Deutsche Bank roughly $364 million, according to his financial disclosure forms; that same bank has been under a U.S. Justice Department investigation for allegedly funneling Russian cash into offshore accounts.

“In keeping with tradition and to avoid the appearance of conflicts of interest, corruption, and violations of the emoluments clause of the US Constitution, President Trump should divest his financial and business holdings or have them administered by a truly blind trust,” reads the petition.