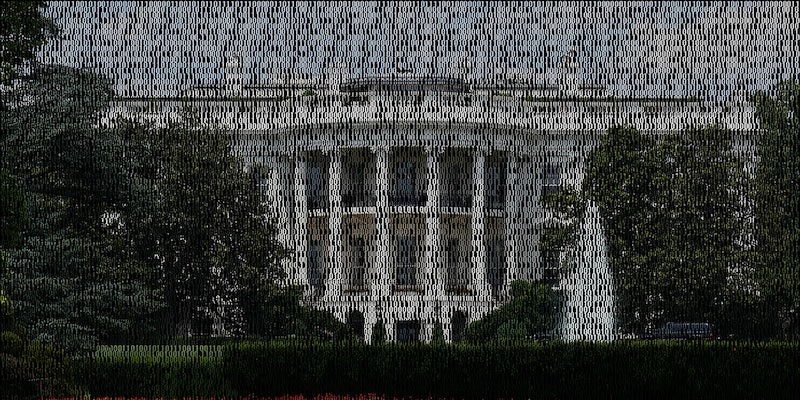 No, this isn't about the NSA.

On Thursday, the White House released new recommendations for stronger privacy laws to protect Americans against mass data collection by businesses and other institutions.

The policy recommendations are the result of a three-month study into the effect of so-called “big data” that was carried out by a working group established by President Barack Obama.

Big data refers to the collection of extremely large data sets that are used by a wide swath of industries—from energy companies to online advertising giants like Google, Facebook, and most companies that have Internet-based businesses—as a way to derive vast amounts of information about people, including data they may not have explicitly shared.

In a post on the White House blog, John Podesta, counselor to President Obama and head of the big data working group, highlighted the wide-ranging potential of big data, while adding that it “raises concerns.”

But big data raises serious questions, too, about how we protect our privacy and other values in a world where data collection is increasingly ubiquitous and where analysis is conducted at speeds approaching real time. In particular, our review raised the question of whether the ‘notice and consent’ framework, in which a user grants permission for a service to collect and use information about them, still allows us to meaningfully control our privacy as data about us is increasingly used and reused in ways that could not have been anticipated when it was collected.

Big data raises other concerns, as well. One significant finding of our review was the potential for big data analytics to lead to discriminatory outcomes and to circumvent longstanding civil rights protections in housing, employment, credit, and the consumer marketplace.

The first is a Consumer Privacy Bill of Rights, first proposed by the president in 2012, which would establish “clear, understandable, reasonable standards” for how citizens’ personal data is used by companies like Facebook, Google, and the data broker industry.

In addition to greater protections to Americans, the report calls for an extension of privacy rights to people in other countries, “because privacy is a worldwide value that should be reflected in how the federal government handles personally identifiable information from non-U.S. citizens.”

The second privacy-focused recommendation calls for an update to the Electronic Communications Privacy Act (ECPA), a law long criticized by digital rights advocates as antiquated and overly broad. The revision should ensure “the standard of protection for online, digital content is consistent with that afforded in the physical world.” The working group includes in its recommended update to ECPA the removal of the law’s “archaic” provision that allows law enforcement to access any emails or documents stored on a third-party server for more than 180 days.

The inclusion of this amendment in the report immediately drew praise from citizen rights groups.

“Everyone who cares about their privacy should be glad that the president’s review group recommends updating ECPA to protect Americans’ communications,” Christopher Calabrese, legislative counsel with the American Civil Liberties Union, said in a statement. “By recognizing that online and offline communications should be treated the same, the report lays the groundwork for keeping everyone’s emails, texts, and photos private and secure.”

The report also recommends the adoption of national data breach legislation, which would standardize the reporting of security breaches and punishments for cybercrimials.

“Big data technologies make it possible to store significantly more data, and further derive intimate insights into a person’s character, habits, preferences, and activities,” writes Podesta. “That makes the potential impacts of data breaches at businesses or other organizations even more serious.”

In addition to blanket privacy protections for all Americans, the report calls for a law to protect college students from their data being used “inappropriately.”

Finally, the report recommends the federal government “expand technical expertise” to help prevent big data being used as a way to discriminate against certain groups.

“Just as neighborhoods can serve as a proxy for racial or ethnic identity, there are new worries that big data technologies could be used to ‘digitally redefine’ unwanted groups, either as customers, employees, tenants or recipients of credit,” the report reads. “A significant finding of this report is that big data could enable new forms of discrimination and predatory practices.”

While this report is a milestone in the federal government’s attempts to wrangle the blossoming use of big data technologies, it remains to be seen whether any of the policy recommendations outlined in the report come to fruition. It also fails to address any privacy concerns relatated to the National Security Agency‘s use of big data.

Read or download the full White House report on big data below: