Which city tipped the lowest for food delivery during Winter Storm Jonas?

Which city has the cheapest residents?

If you ordered food for delivery during Winter Storm Jonas, here’s to hoping that you tipped like a Rockefeller. Food delivery drivers braved treacherous road conditions and record snowfall to bring East Coasters their much-needed pad thai and falafel wraps. Even as airlines cancelled flights, Broadway cancelled shows, and mayors warned residents to stay off the road, food delivery websites such as Seamless and Grubhub made it possible for the hungry to order a meal at the click of a button.

Grubhub shared with the Daily Dot its user data on the average tip per delivery in New York City, Philadelphia, and Washington, D.C., during Winter Storm Jonas. The good news? Each city tipped higher than average during Jonas. The bad news? It wasn’t by much. To get an idea of how generous each city is during dry weather, the popular food delivery service shared with us how each city tipped on average over the previous four weekends (Friday, Saturday, and Sunday).

But put double-digit inches of snowfall into the mix? People are more likely to take out their wallets. 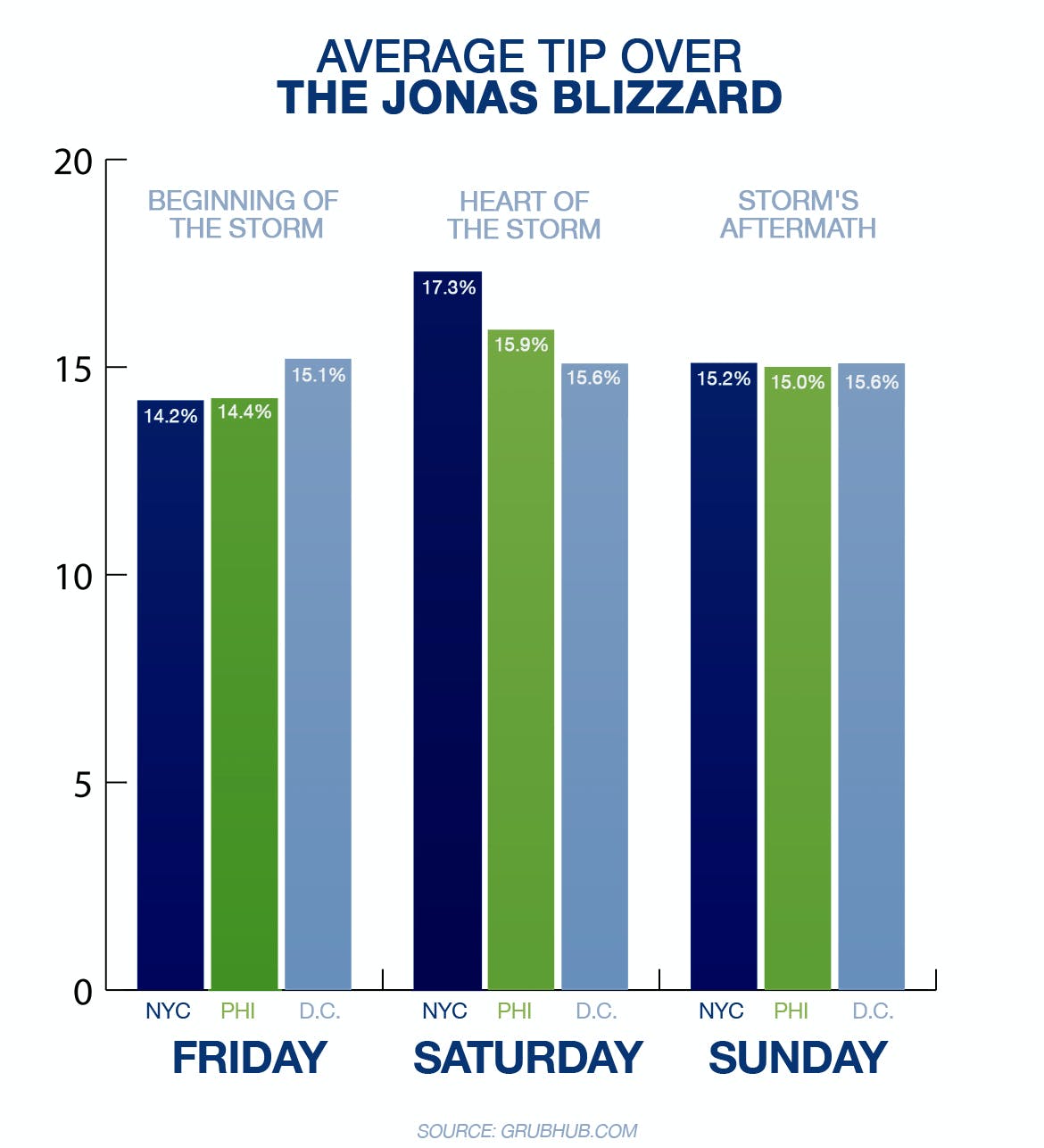 Turns out that New York City was the most generous tipper during the heart of Winter Storm Jonas, tipping 17.3 percent on average on Saturday. Given that Mayor de Blasio issued a travel ban in NYC on Saturday at 2:30 pm ET, that may have been an attempt by some customers to expedite the process.

But Washingtonians are fair-weather friends indeed. Even though Washington, D.C., saw a more severe storm on Saturday, the District tipped 15.6 percent per meal delivery. That’s 1.7 percent less on average than New York City and 0.3 percent less than the City of Brotherly Love.

By the time the blizzard ceased on Sunday, tips began to decline in New York and Philadelphia. Even as roads remained unpaved and piled with up to three feet of snow in some areas, New Yorkers tipped an average of 15.2 percent and Philadelphians tipped an average of 15 percent. To their credit, Washingtonians are creatures of predictability; they tipped the same percentage (15.9) during the storm’s end on Sunday as they did during its most tumultuous middle.

Even though all three cities tipped higher during the storm, the average was still lower than recommended for such inclement weather. Gizmodo recommends tipping at least 50 percent during snowstorms. While the average recommended tip is 20 percent, Grubhub allows users to select an option to tip as low as 10 percent.

But the behavior is not restricted to one service. As one food delivery person divulged in the New York Post, she was stiffed on tips even after she braved record winds to deliver dinners to residents of luxury buildings and investment bankers during Jonas.

I was frozen with disbelief.

It shouldn’t be news to anyone that a 20 percent tip is standard for all members of the service industry.

But braving a blizzard is not standard — it’s exceptional.”

Here’s to hoping that future storms will find people willing to be more generous. Or suck it up and go to the grocery store.