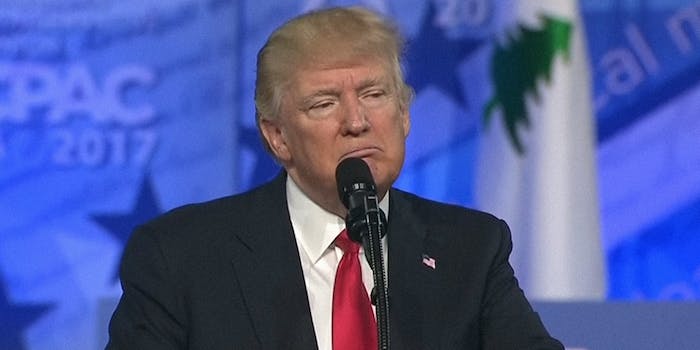 These prominent conservative voices called for Hillary Clinton to be sent to prison for her improper use of private email. Where are they now?

“Lock him up,” said no one in the Republican Party.

According to a Monday report from the Washington Post, President Donald Trump shared “highly classified information” on the Islamic State terrorist group with the Russian foreign minister and Russian ambassador during a closed-door meeting last week. Although the paper notes that Trump has “broad authority to declassify government secrets,” the disclosure may jeopardize U.S. intelligence-sharing partnerships and, thus, national security.

While Trump defended his actions in a series of tweets, this brouhaha should be familiar to anyone following politics over the past year. Reports that former Democratic presidential candidate Hillary Clinton housed classified materials on a private email server derailed her campaign and led to numerous calls on the right to hold her accountable for threatening national security. Many conservatives went so far as to suggest she should be thrown in prison.

Let’s check in to see how those Republicans are responding today.

Past: The former national security adviser to Trump resigned from his post in February over news that he lied to Vice President Mike Pence regarding his communications with the Russian ambassador, Sergey Kislyak, who also attended the meeting with Trump. Flynn, one of the loudest voices on the right calling for Clinton’s imprisonment, told a crowd at the Republican National Convention (RNC) that Clinton was “reckless” and “believes she is above the law.” Flynn added that if he “did a tenth of what she did, I would be in jail today.” When the raucous crowd chanted “Lock her up,” he encouraged them: “Lock her up, that’s right.”

Present: Flynn has not posted to his Twitter since December, nor has he made any other public statements on the matter.

Past: Christie, a 2016 Republican presidential candidate and one-time vice presidential hopeful, gave a speech at the RNC where he asked the audience to judge Clinton for her crimes. “Tonight, as a former federal prosecutor, I welcome the opportunity to hold Hillary Rodham Clinton accountable for her performance and her character,” the New Jersey governor said. “Here’s what we’re going to do: We’re gonna present the facts to you, you, tonight, sitting as a jury of her peers, both in this hall and in your living rooms around our nation.”

Every time Christie presented one of Clinton’s alleged crimes, he would ask attendees, “Guilty or not guilty?” The crowd would invariably chant back, “Guilty!”

Present: Christie has been silent on the intelligence-sharing controversy.

Past: The conspiracy-theory-loving radio host, who believes the September 11, 2001, terrorist attacks were an “inside job” and that the government controls the weather, famously endorsed Hillary Clinton in 2015—but not for president of the United States. Jones believed that she was a strong candidate for prison, and his website, InfoWars, sells a “Hillary for Prison” T-shirt. Last year, InfoWars also floated the rumor that Clinton was fleeing the country after losing the election in fear that President Trump would prosecute her.

Past: The little-known Republican politician from Ohio made national headlines in 2016 when he suggested that Clinton should be “hanging from a tree.” Flowers, the commissioner for Licking County, was upset that there had been so much criticism of a speech where Melania Trump plagiarized then-First Lady Michelle Obama in her RNC speech when Clinton is allowed to roam free. “I’m convinced, 30 years ago she’d been locked up for life,” Flowers would later add. “I truly believe she has become above the law. That’s how far our system has fallen.”

Past: The Florida attorney general was among the many speakers who took aim at Clinton during last year’s RNC. Bondi, who became a meme after getting roasted by CNN host Anderson Cooper, said that Clinton “deserves no security clearance” and claimed that the former secretary of state’s actions encourage “lawlessness.” Egging on the cries of “Lock her up!” from the audience, Bondi added that Trump would “stop it” if elected president.

Present: Bondi hasn’t tweeted since April, and her last post was a retweet about college football. It does not appear she has otherwise commented publicly about Trump sharing intelligence with the Russians.

Past: The CEO Standard Waterproofing Corp., a vocal Trump supporter, was one of four businessmen invited to speak at the 2016 RNC. Wist argued in his speech that electing Trump would “keep the American Dream alive” and that—if Clinton were made president—she would help destroy it. “After 30 years in public life her only accomplishment is beating the rap every time she breaks the law,” Wist said.

Past: The right-wing pundit, who has been attempting to sell himself as “woke” after Trump’s election to the White House, published a piece on his website last January calling for the former Democrat’s imprisonment. “Hillary Clinton broke federal laws and compromised the security of the United States of America,” the post read. “She should be behind bars.” Although Beck would later change his tune by coming out to endorse Clinton late in the race, the shock jock claimed that it would require “God’s help” to ensure she is sent to prison.

Present: Surprise! Beck, recent discoverer of fedoras, did call for accountability for Trump’s actions, saying on Twitter that “subpoenas should be issued and questions should be answered.”

Subpoenas should issued and questions should be answered. More on Trump now. Listen at https://t.co/pkdyC33lfO

Past: The former Major League Baseball player and current columnist for Breitbart is known for his controversial, extreme views—which include comparing Muslims to Nazis. During a March 2016 interview with Kansas City’s 610 Sports radio, Schilling claimed that Clinton “should be buried under a jail somewhere.” Schilling, who would later be fired from his job as an ESPN talking head, added: “If she’s allowed to get to the general election before she’s in prison, I’ll be stunned and upset.”

Past: Trump’s trusted former adviser, often credited as the man who got him elected, is the man who claimed during the 2016 election that Clinton had Parkinson’s disease after she fainted while battling the flu. Soon to be the subject of his own Netflix documentary, Stone argued that the “bitch can hardly stand up.” The former lobbyist has called for Clinton’s imprisonment numerous times, and even said that James Comey—the former Federal Bureau of Investigations chief in charge of investigating Clinton’s server—should be in jail along with her. He urged Trump to fire Comey multiple times, which Trump eventually did—the day before he met with the Russian officials.

Present: Stone has yet to comment on the Russia reports directly but has retweeted InfoWars reports on the conspiracy to oust Trump and joined Alex Jones in their “report” on the situation.

Past: The New Hampshire House representative was known for outlandish statements about Clinton during the 2016 presidential election, during which he served as a delegate for Trump. The two frequently appeared at rallies together. Rep. Baldasaro became the subject of a Secret Service investigation in July after claiming during a radio interview that Clinton “should be put in the firing line and shot for treason.”

Present: In lieu of making his own statement on the Russia story, Baldasaro retweeted Trump’s comments on the reports.