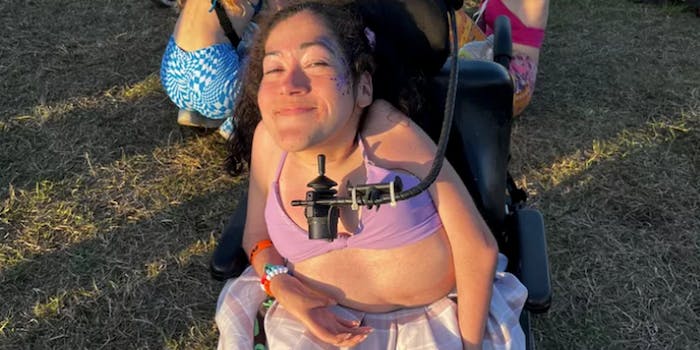 A woman is making TikTok’s spinning in her motorized wheelchair for donations to her van fund. TikTokers say it’s exposing the state of the U.S. healthcare system

'I hope some guilt ridden insurance company CEO sees this and sponsors you.'

A woman on TikTok is uploading videos of herself spinning in her motorized wheelchair in an effort to raise money for a handicap-accessible van. But even though the videos are being celebrated, they’re also leading many to question the state of the U.S. healthcare system.

The TikToker, 21-year-old Lauran Mayeaux, was born with Arthrogryposis Multiplex Congenita and can not use her extremities. Mayeaux began sharing her story on TikTok two years ago and has since garnered over 165,000 followers.

One of Mayeaux’s latest viral videos, in which she spins “like a spinning top” to raise money for the van, has racked up more than 1.2 million views.

Another version of the video uploaded by Mayeaux, which was set to the viral song “Helikopter” by Fazlija, earned over 1 million views as well.

In one of her most viral videos to date, another clip of her spinning set to the smash hit “Cyclone” by Baby Bash featuring T-Pain earned an impressive 11 million views.

The videos appear to be a success given that Mayeaux has been able to raise more than $10,000 on her GoFundMe page. Mayeaux hopes to reach $40,000 to purchase the new van.

“Due to my disability, I use a power wheelchair 100% of the time,” Mayeaux wrote. “This makes it difficult to use any other vehicle than my own.”

And while her followers are happy to help, many are questioning the state of our healthcare in light of her struggles.

“America’s Healthcare System in a nutshell,” one user wrote.

Others called for an insurance company to step in and help.

“You better get your cash girl,” one commenter said. “I hope some guilt ridden insurance company CEO sees this and sponsors you.”

With more than $30,000 to go, Mayeaux continues to spin in her wheelchair in everyone from Target to Chick-Fil-A.

The Daily Dot reached out to Mayeaux via email for comment on this story but was not met with an immediate reply.

Update 10:03 pm CT, April 28: In a statement to the Daily Dot, Mayeaux said she felt gratitude for all the support she has received from her spinning videos.

“I never in a million years expected it to get 11 million likes, let alone get me a fourth of the way to my goal!!” she said. “I mostly made the spinning video as a joke which i didn’t think would get traction! I think it’s important to note that accessible transportation is dire in the disabled community, yet it’s extremely difficult to come by.”