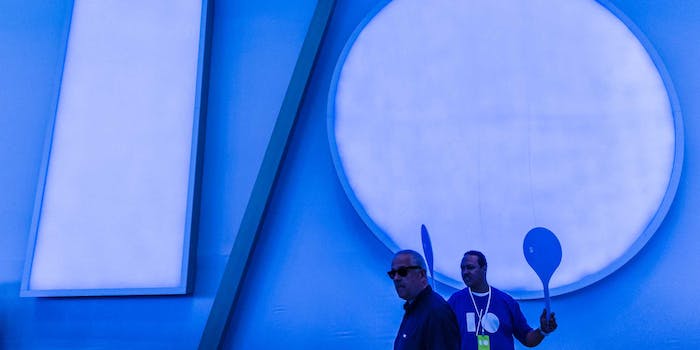 4 things Google conspicuously left out of the I/O keynote

"Pay no attention to the man behind the curtain!"

Google spent a lot of time talking about its products yesterday during theGoogle I/O conference keynote—some would say too much time—but the company still managed to completely gloss over a bunch of things we all really want to know about. Some of the missing items are explainable, while others are real head-scratchers. Regardless of the reason Google kept us in the dark, these are the biggest no-shows at the year’s biggest Google event.

Google’s social network didn’t warrant a single meaningful mention during the company’s showcase, lending a whole lot of weight to the idea that even Google has given up on it. Google+ was supposed to destroy Facebook and put Twitter on the backfoot, but all it’s done is become the punchline to every social media joke of the past two years.

It’s not clear at this point if Google has big plans for the service going forward or if it’s going to simply serve as the commenting platform for YouTube videos from here on out. Either way, it’s painfully obvious that Google+ hasn’t lived up to its potential. Last year, Google I/O brought news of new photo capabilities and a list of over 40 new features for Google+, and this year it’s nothing but a ghost.

Um, why isn’t Google showing some love for one of its services that people actually like? Aside from Google’s search engine, YouTube is essentially the most far-reaching and popular brand the company owns, but even that wasn’t enough to warrant a mention during the keynote.

The lack of YouTube in the presentation can be explained away with the old “Google I/O is for developers, not consumers” excuse, but the service has at least been mentioned at keynotes of years past. Even when Google forgets to bring it up during its big I/O chat—as it did in 2013 as well—YouTube continues to get tweaks and improvements at least a couple times a year, so unlike Google+, so don’t wouldn’t worry about YouTube suddenly disappearing because of its I/O absence.

Google’s ever-intriguing headset got zero billing during the stage show. Despite a one-day public sale earlier this year, Google had nothing to say about any impending retail release plans. Anyone wondering when a consumer version will arrive was left unsatisfied.

Why would Google fail to mention one of its most interesting products? Well, there could be a couple of reasons for that. For starters, it’s a $1,500 computer you wear on your face, and that’s still a pretty tough sell for anyone aside from ridiculously hardcore tech enthusiasts. There are also the privacy and safety issues, with a reported 72 percent of people saying they’d never wear one due to either the creepy “Big Brother” feel of the device or because they fear it would be dangerous distraction during daily life. If Google is unsure of how it will quell these concerns, Glass’s stage appeal is severely limited.

This year marks the first I/O keynote in recent memory that concluded without a mention of a new piece of Google hardware. The Chromecast, Nexus 7 tablet, and Google Glass were all unveiled in previous years, but that came to a halt this year.

Either Google simply has no new hardware to show, or the company attempted to cram as much developer information as it could into the I/O keynote, leaving hardware announcements for their own special events, as Apple has traditionally done. A new hardware reveal would have gone a long way to spicing things up during the long winded presentation, but unfortunately it just wasn’t in the cards this time around.

This year’s I/O keynote pushed three hours, so if Google had anything to say about these three huge bullet points, it certainly had plenty of time to do so.