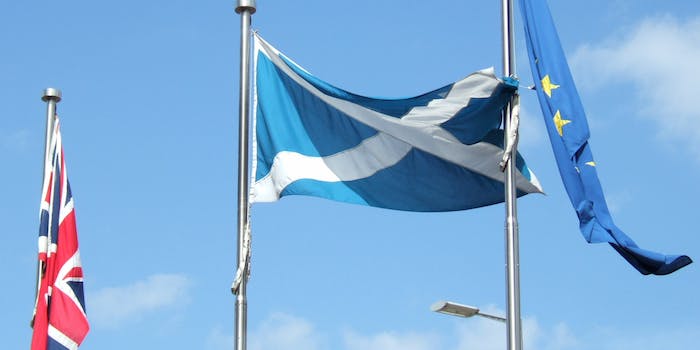 What is the Scottish independence referendum all about?

Who rules The North?

If you think your Facebook wall is annoying during election season, try living in the middle of the Scottish independence debate.

On Sept. 18, the people of Scotland will decide whether to secede from the rest of the United Kingdom. This referendum is by nature a very divisive issue, with only two deceptively simple options on offer: Yes or No.

On the streets of Scotland, you can barely walk ten paces in a populated area without seeing windows emblazoned with the ecstatic “YES” or the more polite “NO thanks” posters. Online, this divide is marked out by buttons in the corner of countless social media avatars. It’s everywhere, and it’s unavoidable.

Fantastic turnout for the opening of the Yes hub in Ellon this morning #IndyRef pic.twitter.com/T4Ft5R9BtU

Unfortunately for the rest of the world, the Scottish independence referendum (or #indyref) doesn’t follow a simple Braveheart narrative of downtrodden Scottish rebels fighting back against their English overlords. Opinion polls show the country split more or less 50/50, with a record 97 percent of the country’s nearly 5.3 million people registered to vote.

So, what’s the issue, exactly?

At the moment, Scotland is partly ruled by the London-based U.K. government, and partly by the Scottish Parliament. The Yes campaign argues that this system doesn’t represent Scottish interests, while No voters think it would be a bad idea for Scotland to strike out on its own.

Who are the Yes and No voters?

A significant proportion of Yes voters are also Scottish nationalists (in fact, the referendum was reputedly timed to coincide with the 700th anniversary of a famous battle with the English, in an attempt to stir up patriotic sentiment), but No voters don’t necessarily have the same affection for the U.K. They are more likely motivated by concerns about Scotland’s future, such as the country’s partial reliance on uncertain North Sea oil stocks.

Is this a fringe issue, or are people really into it?

One of the most impressive things about the referendum is how much everyone is engaging with the debate—not as a result of campaign leaders, but in spite of them.

Who are the characters leading the Scottish independence debate?

The public face of the No campaign is Better Together, which is backed by all three of England’s main political parties: the Conservative/Liberal Democrat coalition government, plus the center-left opposition Labour party. The biggest problem with this? All three of these parties are headed up by posh, Oxbridge-educated Englishmen, the precise demographic that many Scottish voters are sick of seeing in power. The Conservatives are so unpopular in Scotland that Prime Minister David Cameron recently said that people shouldn’t vote Yes just to “give the effing Tories [Conservatives] a kick.”

Cameron urges Scots not to back independence just to “give the effing Tories a kick” https://t.co/BQ0xV0iSTe #indyref pic.twitter.com/pSVSQGWFzF

To be fair, the leader of the Yes campaign is hardly any more inspirational. Alex Salmond is the head of the Scottish National Party (SNP) and has been First Minister of the Scottish Parliament since 2007. The success of Salmond’s SNP is part of the reason why this referendum is happening in the first place, but he’s not exactly a glamorous figure. Yes voters aren’t voting for him or even for the SNP, they’re voting to get out of the Union.

This lack of a charismatic leader on either side may actually be a blessing in disguise because it leaves voters to make a decision based on policy rather than personality. That is, unless they’re driven off the deep end by the duelling advertising campaigns. The cinema ads from both sides were so unpopular that Scottish cinema chains decided to remove them entirely.

With the vote split so closely between Yes and No, both sides have resorted to increasingly desperate advertising campaigns. One widely-derided No campaign commercial tried to win over undecided female voters with the message that working moms just don’t have time to worry their heads over researching both sides of the argument. “It’s too early to be discussing politics,” says the woman in the ad, talking to her referendum-obsessed husband. “Eat your cereal.”

That ad was patronising enough to spawn a thousand memes, but it did have a point: The independence debate is a very complicated issue. The Yes campaign has published a 600-page “road map” for an independent Scotland, but the obvious truth is that no one can actually predict the future. Hence the country’s 50/50 split.

What other nonsense is going on?

Yes campaign leader Alex Salmond has repeatedly floundered on important issues, such as the future of Scotland’s currency, while No voters are often frustrated by the Better Together campaign’s obsession with scare tactics. These tweets from parody news account @DMReporter barely feel like an exaggeration any more:

INDEPENDENCE: Could a ‘yes’ victory plunge England into centuries of Sharia Law? And higher house prices? And a cancer epidemic? Yes.

Conservative politician Ruth Davidson recently compared Scotland to the vulnerable Ukraine, harking back to a bizarre theory that Scotland might be open to attack from Russia. Then during a debate for Mumsnet, a highly influential British parenting community, leaders from both sides were criticized for “bullying” and patronizing behaviour. Usually this kind of negative (or incompetent) campaigning turns voters off, but the referendum is such a hot-button topic that many people are just carrying on the debate while attempting to ignore their gaffe-prone leaders.

If you’re looking for an example of a classic #indyref gaffe, look no further than the attempt to fly the Scottish flag over the Prime Minister’s house in London. In a moment of true schadenfreude that could even be appreciated by the most ardent No supporter, this consisted of the flag reaching half-mast before falling straight back down again. Not the best of omens.

Have any celebrities thrown in their support?

Yes, but not many. This kind of public embarrassment may be why relatively few Scottish celebrities are making their opinions known. At the moment, Harry Potter author J.K. Rowling is the most vocal, and she has long been on the receiving end of a barrage of personal attacks on social media.

A few months back, Rowling donated £1 million to the No campaign, accompanied by one of the most sensible and thoughtful statements in the history of celebrity endorsements. After that she stayed quiet for a while, until a few weeks ago when her Twitter presence went from “sporadic-but-charming updates” to “constant stream of political commentary.” Rowling is no stranger to public political statements, but this is the first time she’s really dug her heels in and used social media to support a particular issue to such a degree.

.@aboymadeofsky No, Jonathan, I’ve never made a single decision in my life on the basis of whether it was cool.

The Yes campaign doesn’t have a celebrity heavy-hitter like J.K. Rowling, although about 80 per cent of their funding comes from a pair of lottery winners named Chris and Colin Weir. (Oh, and Kim Jong-un supports them, so make of that what you will.) Online, the best person to follow is comedian and YouTube/Vine star Limmy, who basically will not shut up about Scottish independence at all, ever.

There are intelligent people down south who think an independent Scotland will snowball into a ginger supremacist apartheid.

YOU ARE NOT TRUE BLOOD SCOT, YOU WILL BE SENT TO ARRAN COLONY TO WORK IN HAGGIS MINE.

No matter which way the referendum goes, there is one thing that will always unite both sides of the debate: the national love of taking the piss. And there is no better example than this recent video of English politicians arriving in Glasgow to support the No campaign… followed by someone playing a loud rendition of the Imperial March from Star Wars.

Is it biting satire? Not in a million years. But half of the comments are from No voters chiming in to say how hilarious it is. There’s hope for common ground yet.