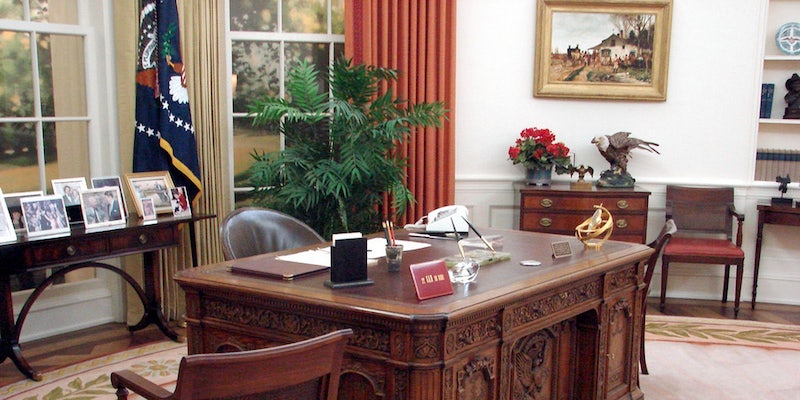 Some of the largest NSA programs find their justification in an executive order signed by Ronald Reagan in 1980.

On Oct. 30, the Washington Post published yet another report of National Security Agency spying. This time, the paper revealed that the agency taps directly into oversees cloud servers of Google and Yahoo to extract user data. In many ways, it seemed like just the latest in a long string of secret NSA programs to come to light since early June. But there was one difference: Unlike many of the most notorious operations—PRISM, metadata collection—this one wasn’t justified by the now-infamous Foreign Intelligence Surveillance Act (FISA) and the Patriot Act. It was the result of a lesser known, perhaps more broadly powerful mandate, Executive Order 12333.

12333 was signed by Ronald Reagan in 1980. As the Electronic Frontier Foundation (EFF) explained in an excellent primer on 12333, the order is used to set out guidelines for NSA spying that falls outside of the jurisdiction of the Foreign Intelligence Surveillance Court, which was created by FISA to govern when and how the agency can spy on Americans.

A good way to understand how Executive Order 12333 differs from FISA is to compare the legal backing for the PRISM program disclosed back in June to the Google and Yahoo cloud server-tapping program disclosed in late October.

Recall that PRISM is the codename for the NSA program that uses secret FISC warrants in order to compel Silicon Valley tech giants (including Google and Yahoo) to turn over users’ emails, chats, photos, videos, and other media. There is much controversy surrounding the oversight of the FISC. Since its creation it has denied only a handful of the thousands of government’s requests for warrants. Leaving those criticisms aside, though, the point is the NSA still needs a warrant—i.e. some level of justification—to collect data on American citizens.

Now consider the much more large-scale back door spying in the tapping of cloud servers. This surveillance is justified by 12333, through a workaround in the order that gives the Attorney General the power to approve such surveillance on U.S. citizens at home or abroad without a warrant. Here’s the relevant line:

“The Attorney General hereby is delegated the power to approve the use for intelligence purposes, within the United States or against a United States person abroad, of any technique for which a warrant would be required if undertaken for law enforcement purposes, provided that such techniques shall not be undertaken unless the Attorney General has determined in each case that there is probable cause to believe that the technique is directed against a foreign power or an agent of a foreign power.”

What that means is that surveillance conducted under 12333 can be carried out beyond the reach of Congress or FISC.

According to the EFF, the NSA apparently also uses the order not only as direct justification to spy but as a way to develop secret legal guidelines for broader surveillance. One such application of these secret guidelines has allowed the NSA to use metadata to contruct social networks of Americans without consulting FISC. In other words, they provide the legal framework for the agency to circumvent the court in cases where it would otherwise likely fall under its jurisdiction.

Regardless of how you feel about NSA surveillance, that’s an incredibly broad application of an order passed a decade before the creation of the World Wide Web.