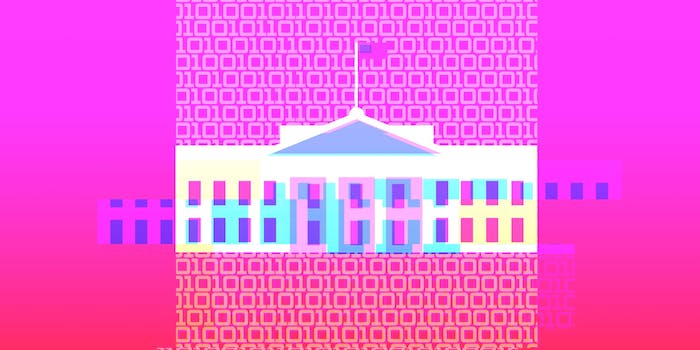 For the candidates involved, presidential elections are emotional roller-coasters. One minute, they’re riding high in the polls, picking out new drapes for the sex dungeon Grover Cleveland installed underneath the East Wing of the White House back in 1886. The next, they’re crouched in the back of their campaign bus, choking back tears and asking an indifferent God what they did to make everyone in Iowa hate them so much.

This week on the campaign trail was a welcome respite from previous year’s worth of no one actually voting. With the Iowa caucuses representing the first tangible votes of the 2016 election cycle, we finally saw the grim weight of reality start pushing down on candidates starting to realize they’ll never be president and instead will have to settle for being incredibly rich and successful in some field related to politics for the rest of their lives until they die in restful comfort surrounded by loved ones.

Trump called everyone a loser until there was no one left except the reflection in the mirror. “You’re a loser,” he whispered, wiping a single tear from his cheek after a disappointing second place finish in Iowa. “Never let anyone else know this, but you’re the biggest loser of all.”

“You have no idea what you’re talking about,” said the reflection after 15 hours of thoughtful silence. “If you appeared on The Biggest Loser, you would lose so many pounds people would be shocked that it was even possible to lose that many pounds. When you have some downtime during your firth of fifth term in the Oval Office, you should launch a line of diet book called Eat Like A Winner. The only thing people love more than eating is winning and you’ll make them win so hard and so often they’ll forgetting what losing felt like. Except, of course, in the context of losing weight, which is more like winning than losing.”

“Thanks,” said Trump. “I really needed that.”

And then, with a desperate public temporarily bereft of reminders about how great Donald Trump is at every conceivable activity, Trump resumed tweeting.

2. Much like George Washington, Bernie Sanders cannot tell a lie

3. John McAfee Is Still Running For President And His Campaign Is Going Great

John McAfee is the founder of the antivirus software company that still hears his last name, even though he is no longer affiliated with the company. He spent a while hiding in the Belize jungle after he was implicated in the murder of a neighbor, though he was never charged. Last year, he announced he was running for president on the Cyber Party ticket.

Let’s briefly check in on how it’s going.

I have been locked out of Twitter for over a week by a fired campaign worker. FBI got it back. Woman soon to be incarcerated.

@officialmcafee how do we know this is really you!?!

@ftchs_ A question I ask myself a lot. It looks like me in the mirror. But I did lots of acid in the 60's so can't always trust my senses

4. The real winner of the Iowa caucus was a dude with stickers on his face

Amid all the excitement of that Iowa caucus, what with the official beginning of a process that will ultimately determine which party will some of the jobs in the Office of Thrift Supervision, it’s easy to forget that politics is boring. Sure, reading about political machinations and watching the President of the United States (SPOILER ALERT) murder people [on House of Cards] is interesting, but the actual reality of the long, hard slog of running for office is deathly dull.

Thinking back to when you were a kid, stuck in a seemingly endless religious service, how did you deal with deathly boredom? You made goofy-ass faces until someone noticed and you got in trouble. However, what if the person who noticed wasn’t your mom? What if it was all of America? And they loved it?

When Hillary Clinton, at that moment in a statistical tie with Bernie Sanders in Iowa, gave a victory speech in all by name on the evening of caucasus, one hero appeared in the crowd behind her. With his face covered in stickers, the so-called “Sticker Kid” instantly goofballed his way into America’s heart.

Sticker kid, you are truly the left shark of the 2016 election. May the next Clinton Administration appoint you to run the Office of Thrift Supervision.

5. “Journalism is printing what someone else does not want printed” – George Orwell

6. Jeb Bush & the Case of the Deep Existential Pit of Despair

In a concise package, the New York Times sums up what it feels like to be Jeb! at the beginning of 2016:

Speaking to a crowd at the Hanover Inn near the Vermont border during his final stop of the day, Mr. Bush finished a fiery riff about protecting the country as commander in chief–“I won’t be out here blowharding, talking a big game without backing it up,” he said–and was met with total silence.

The crowd laughed–and then, finally, clapped.

When Jeb! finally abandons his unexpectedly quixotic campaign for the Over Office and goes home to see his parents, all he will want is a single hug from his mother. It will not be given.

It’s hard out there for a Jeb! and many election observers are watching the slide in the former Florida governor’s electoral fortunes while sipping on a cold, refreshing glass of schadenfreude. But that’s mean, you guys. That’s really mean.

We at the Daily Dot watched the video of Jeb!’s “please clap” moment and decided to pitch in and do our part. That’s why we remixed the footage to give the appearance that Jeb! received the approval he so desperately craves.

8. Only a psychedelic Twitter bot truly understands what Sarah Palin is talking about

Erowid is a website where phsychonauts trade stories about how hard they tripped last weekend.

Next-level genius Gabe Ortiz created a Twitter bot that mashes together comments from Erowid and lines from Palin’s speeches. And it is glorious.

I immediately start crying tears having to do with every possible emotion one could feel my hands felt like a liberal on gun control.

Yes, Barack, he built that, and I could stand, and saw that my face had separated into another world.

We believe in America, and we both burst into uncontrollable laughter when we realized we could ‘see’ smells, and touch ideas.

As my legs began to liquidize and colours started to run for president, Drill, baby, drill into another dimension.

9. Barnie Sandlers is the one and true progressive

The two remaining Democratic candidates spent most of this week arguing over which one of them was more progressive. However, as a true progressive like pretend parody candidate Barnie Sandlers instinctively knows, there’s nothing more progressive than dank memes. 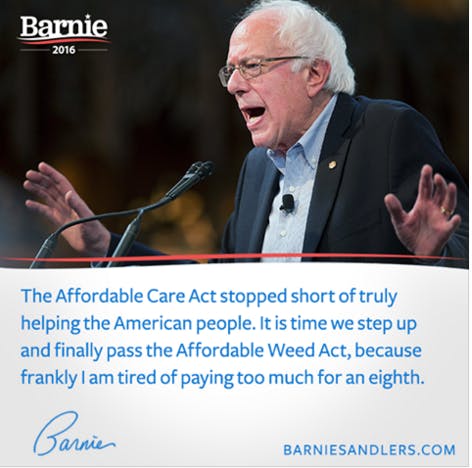