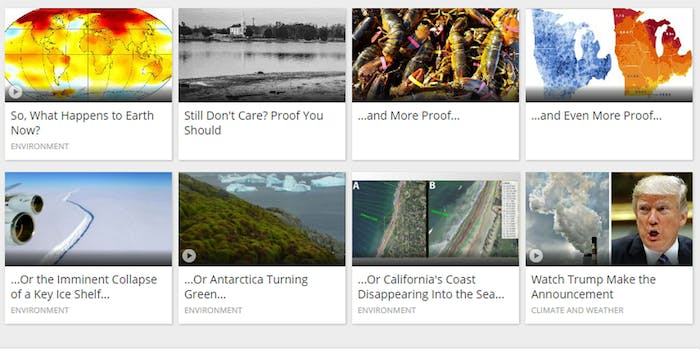 Weather.com is clearly not a fan of President Donald Trump’s decision to back out of the Paris Climate Accord.

As Trump made his controversial decision to withdraw from the accords, Weather.com threw some intense shade. As of 4 p.m., Weather.com’s homepage led with a “LIVE BREAKING” news story about Trump’s decision, but the posts underneath the headline was where the real trolling began.

The eight stories under the website’s main header were all related, warning about the consequences of Trump’s decision.

The eight tiles read as follows:

“So, What Happens To Earth Now?”

“Still Don’t Care? Proof You Should”

“…Or the Imminent Collapse of a Key Ice Shelf…”

“…Or California’s Coast Disappearing into the Sea…”

During his announcement, Trump said he would be willing to re-enter the agreement if the current administration is able to renegotiate its terms in ways he sees as more beneficial.

The agreement, which has be hailed as a significant achievement by many climate scientists, is a worldwide agreement to reduce greenhouse gasses and invest $100 million each year to help combat the effects of climate change.

Former President Barack Obama released a statement during Trump’s address, and said Trump’s decision to withdraw from the accord put the United States among “a small handful of nations that reject the future.”