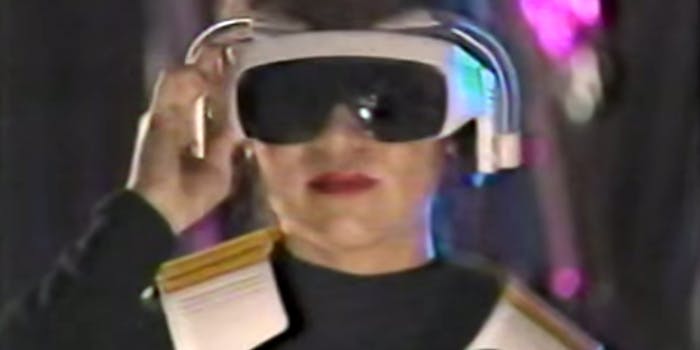 Here’s what we thought wearables would look like in 1992

Twenty-two years ago, the Discovery Channel endeavored into the future.

Twenty-two years ago, the Discovery Channel endeavored into the future with the series Beyond 2000. It glimpsed the crossroads of design, technology, and fashion in the 21st century, and it looked about as sophisticated as the Talkboy from Home Alone 2.

Tracey Curro serves as the intrepid host through the 2003 spring- and summerwear collection of NEC, titled “Dressing for Tech-cess.” The accented sophisticate and her posse of kabuki theater extras guide us through a range of devices referred to as “human wear engineering”—what we now know as the terrible neologism “wearables.”

With bulky hardware that hangs from the shoulders and torso like a drunk sloth, the majority of these “wearable” artifacts look like exercise equipment bought off an infomercial that aired during reruns of Home Improvement.

The CD shoulder pads are reminiscent of something Mattel would sell as part of a deluxe Power Rangers costume, while the yellow data terminal and wrist plate look like laser-tag garb discarded from a Discovery Zone.

All lampooning aside, like with all retrofuturism, things seem naively archaic from the privilege of today’s perspective. It’s the forward-thinking ambition of NEC and a scoliosis brace called a “Wear Cam” that paves the way for future innovations like the GoPro. Just as the prophecy foretold in 1992, the future would be filled with Glassholes and Oculus Rift lovers:

In the not-too-distant future, human beings will wear the computers they use. We’ll choose our hardware, not just for its bits, bytes, and RAM, but like designer clothing and jewelry, for its look, comfort, and style.

The essential philosophies of technology were there, but the aesthetics were not, and perhaps they still aren’t. Future generations will look back on glass and the Samsung Galaxy Gear watch and laugh even harder than we already have at the term “wearables.”

Either way, I’m still bitter I never got a sweet Sidekick back in high school.