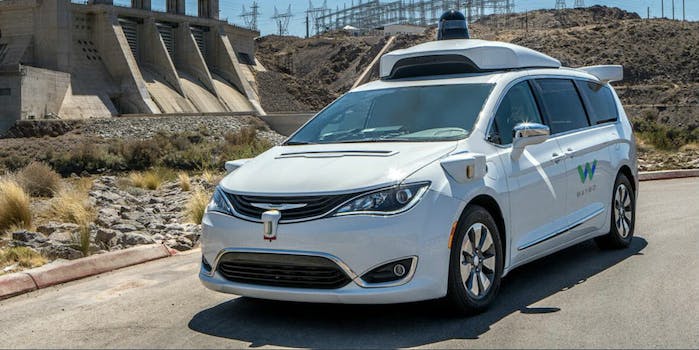 It's free of charge.

Imagine how terrifying it must have been for the first pilot to fly a plane or the first astronaut to go to space. You’ll inevitably have to face that same terrifying uncertainty, and it may come sooner than you think. Fully autonomous, or driverless, vehicles are expected to arrive in the next decade. That means you may soon be taking your hands off the wheel and putting your trust in cameras, sensors, and computer systems.

Fortunately, if something does go wrong, you’ll be covered.

Waymo, the self-driving car division of Google’s parent company Alphabet, announced it will partner with insurance startup Trov to insure future riders of its self-driving ride-hailing service for lost or damaged property and medical expenses. That is, if you get injured in an accident while riding in one of Waymo’s vehicles, you won’t have to pay out of pocket. The coverage will be provided free of charge, though it is only for those inside the vehicle.

The impending proliferation of self-driving cars and their potential to disrupt car ownership has insurance companies scrambling to adjust to an accident-free future. Some experts believe autonomous vehicles could remove 80 percent of insurance premiums from the property-casualty industry.

Waymo is currently a frontrunner in a heated race to put a fleet of autonomous vehicles on city roads. Last month, it became the first to put a self-driving van on public streets without any human in the vehicle.

It’s unusual for a company to announce a benefit of a service before it officially reveals the service itself. However, it may not be long before we see Waymo deploy its first batch of self-driving cars to go with its future Uber-like ride-hailing service. The startup’s CEO said in November that “in the next few months” it would offer rides to people in Pheonix.