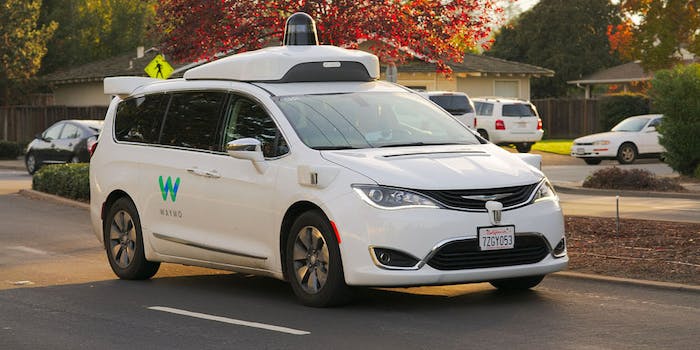 Beta testers of the Waymo One app in Phoenix could soon be picked up by a driverless vehicle.

A company email posted to Reddit states that participants of Waymo’s Early Rider Program may soon be picked up by one of Waymo’s Chrysler Pacifica minivans with nobody behind the wheel.

“Completely driverless Waymo cars are on the way,” the email says.

Beta testers of the company’s ride-hailing app, called Waymo One, will receive an alert if a driverless vehicle is on its way to pick them up.

“You’ll see a ‘What to expect’ button in your app, which you can tap to learn more about our driverless rides,” the email also adds.

Previously, Waymo employed drivers to sit in the driver’s seat as a safety measure. At the moment, it isn’t explicitly clear whether those employees will still somehow be present in the vehicle, even if momentarily. The email does, however, state that riders will have the vehicle all to themselves, so it would appear riders will be entirely alone.

Either way, all of Waymo’s vehicles are constantly monitored and riders can contact a human representative through the app at any time.

The announcement represents a significant step forward for the company. Although Waymo initially planned to begin offering driverless rides to customers in 2018, the company has repeatedly pushed back those estimates.

While the testing continues in the Phoenix, Arizona area, Waymo also plans to begin mapping out certain areas in Florida and Los Angeles for its driverless cars to begin hitting the roads as well.

The company is also investing in self-driving trucks, which began delivering freight in Atlanta last year.