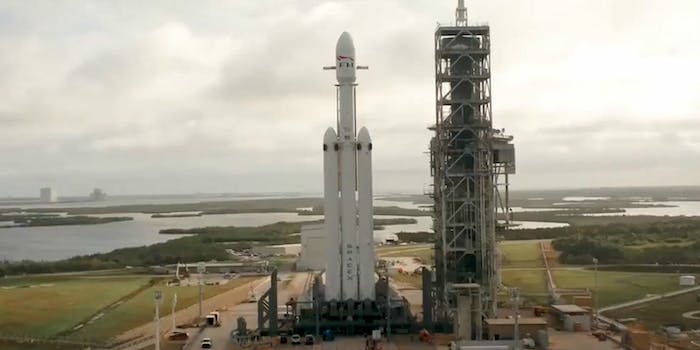 After months of delays, SpaceX is finally ready to launch the Falcon Heavy for the first time on Tuesday, marking an historic moment in spaceflight.

Here’s everything you need to know about the launch.

How to watch the SpaceX Falcon Heavy launch

SpaceX looks prepared to launch on Tuesday. Elon Musk said on Twitter yesterday that “all systems remain green for launch at 1:30pm EST.” The launch window is between 1:30pm and 4:00pm ET, and there remains an 80 percent chance of favorable weather conditions. If the weather turns or if there are any technical glitches, SpaceX will have another chance to launch during the same hours on Wednesday.

Latest reports have the launch time at 3:05pm EST. If winds don’t die down soon, it will force SpaceX to push the launch to Wednesday.

Elon Musk confirmed the delay on Twitter, citing wind speeds that are “20% above max allowable load.”

Why it matters: When it lifts off, the 3-million-pound spacecraft will become the most powerful operational rocket in the world with the ability to lift more payload than any rocket since the Saturn V. Because of the risks of exploding at launch, it won’t be required to lift anything heavy on its maiden flight, just an electric vehicle being driven by a dummy.

Inside the cone of the rocket is Elon Musk’s very own “midnight cherry” first-generation Tesla Roadster being driven by a dummy wearing SpaceX’s chic spacesuit. It will play David Bowie’s “Space Oddity” on loop as it flies toward Mars on a “billion year” voyage. Musk said he chose the payload because it was the silliest thing he could think of.

The business magnate posted a concept video of a successful launch. It shows the Falcon Heavy, which is essentially three Falcon 9 rockets strapped together, launch off into space. When it reaches orbit, the side boosters detach, turn around, and land back at Cape Canaveral while the central booster shoots out the Tesla Roadster and returns to a floating launch pad in the Atlantic Ocean.

There is a real chance the Falcon Heavy explodes on the launchpad. Musk cautioned, “This is a test mission. There is so much that can go wrong.” He puts the odds of a completely successful run at one-half to two-thirds. A functional Falcon Heavy will be used to launch heavy payloads, like spy satellites and space probes, into space.

The Falcon Heavy will launch from Pad 39A at the Kennedy Space Center in Florida, the same pad used by Apollo 11 on the flight that sent the first humans to the moon.