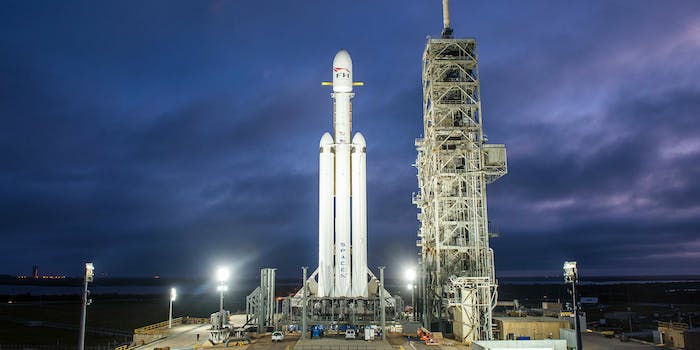 The most powerful rocket in operation could takeoff later this month.

SpaceX has given us our first look at the world’s most powerful rocket sitting upright on a launchpad. Uploaded to Flickr, a set of gorgeous images shows the massive Falcon Heavy rocket pointing toward its eventual destination as it preps for its maiden voyage into space later this month.

Last Thursday, SpaceX conducted a “fit check” to make sure the rocket could be properly positioned on the launch platform at NASA’s Kennedy Space Center in Florida. It carted the 3-million-pound monster to the spot where it will soon blast off into space and propped it up on a launchpad that was originally used for Saturn V’s moon flights. Never afraid to show off its work, Elon Musk’s firm posted a drone video to Instagram alongside the images.

With more than 5 million pounds of thrust at liftoff—equal to approximately eighteen 747 aircraft at full power—Falcon Heavy will be the most powerful operational rocket in the world by a factor of two.

As you can see, the Falcon Heavy’s size is impressive. It is, by a good distance, the most powerful operational rocket in existence, essentially consisting of three Falcon 9 rockets strapped together. In fact, only the Saturn V rocket, last flown in 1973, could deliver more payload to orbit.

“With more than 5 million pounds of thrust at liftoff—equal to approximately eighteen 747 aircraft at full power—Falcon Heavy will be the most powerful operational rocket in the world by a factor of two,” SpaceX wrote on Instagram.

Details on the Falcon Heavy’s upcoming launch are scarce. We do know it will launch Musk’s personal first-generation “midnight cherry” Tesla Roadster on a billion year elliptic Mars orbit playing David Bowie’s “Space Oddity.” Why? Because it was the silliest payload Musk could imagine, “Test flights of new rockets usually contain mass simulators in the form of concrete or steel blocks. That seemed extremely boring,” Elon Musk wrote last month. The Tesla was reportedly positioned in the rocket’s nose cone when these images were taken.

The next major test for the Falcon Heavy before it rockets into the cosmos is a static fire of all 27 Merlin engines. If everything goes to plan, we could see a launch date set for later this month or early February. Like its Falcon 9 sibling, the Falcon Heavy is recyclable, so all three of its cores should land back onto pads in Florida—that is, if they don’t blow up on takeoff.