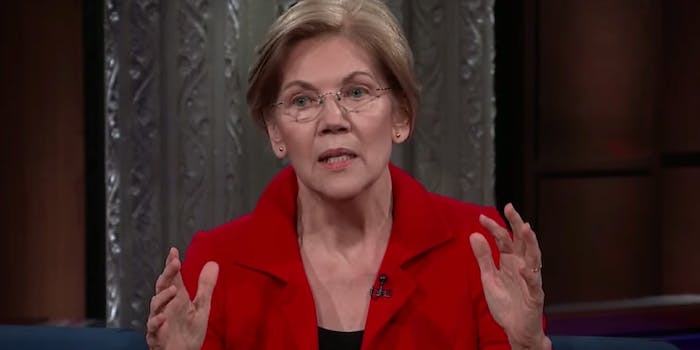 Trump’s original tweet described Gillibrand as a “lightweight” who would “do anything” for campaign contributions. The smear came after Gillibrand joined the list of senators publicly calling for Trump’s resignation amid multiple women accusing him of sexual misconduct.

Interpreting the message as inappropriately suggestive, Warren took to Gillibrand’s defense and responded with her own message to the President, ending the tweet with the now-famous hashtag #ShePersisted.

“Are you really trying to bully, intimidate and slut-shame @SenGillibrand?” Warren tweeted. “Do you know who you’re picking a fight with? Good luck with that.”

Are you really trying to bully, intimidate and slut-shame @SenGillibrand? Do you know who you're picking a fight with? Good luck with that, @realDonaldTrump. Nevertheless, #shepersisted. https://t.co/mYJtBZfxiu

While Trump has made no further comments, White House Press Secretary Sarah Huckabee Sanders said Tuesday that Trump’s sentiments were not sexist, denying there was any sexual innuendo embedded in the tweet.

“Only if your mind is in the gutter would you have read it that way,” Sanders said.

Even so, many do not believe Sanders’ explanation or agree with Trump’s sentiments.

Awww…I bet you’re just still bummed that you were runner up for the #TimePoTH honor. In case you didn’t know — women unafraid to speak out against their abusers beat you. #BreakTheSilence

So what are you insinuating when you say @SenGillibrand "would do anything"? You sir, as @POTUS, are dragging down the dignity of office of the Presidency. TRAGIC

Gillibrand chose to respond with her own tweet, as well.

“You cannot silence me or the millions of women who have gotten off the sidelines to speak out the unfitness and shame you have brought to the Oval Office,” she wrote.

“I see it as a sexist smear. I mean that’s what it is,” Gillibrand said. “It’s part of the president’s efforts of name calling and it’s not going to silence me.”