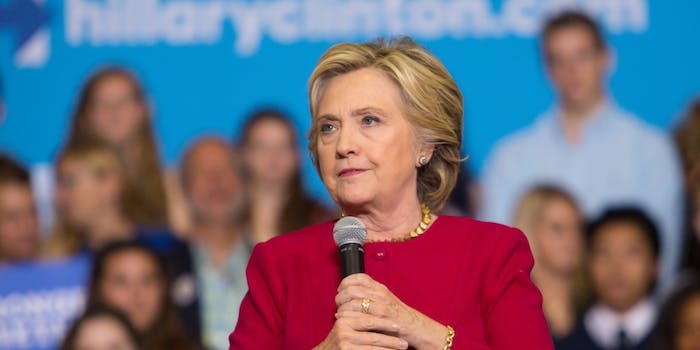 A federal court on Tuesday unsealed search warrant documents pertaining to the FBI’s renewed investigation into Democratic presidential nominee Hillary Clinton‘s emails. And some legal experts are shocked by what the documents reveal.

Magistrate Judge Kevin Fox of the U.S. District Court in Manhattan issued the search warrant on Oct. 30, two days after FBI Director James Comey informed Congress in a letter that investigators had discovered “the existence of emails that appear to be pertinent to the investigation” into Clinton’s use of a private email system as secretary of state.

Comey’s letter to Congress coincided with a steep drop in the polls for Clinton, who ultimately lost the election to Republican Donald Trump by roughly 80,000 votes across three states. Comey’s letter is considered one of the primary factors that Clinton lost the presidential election.

The warrant pertained specifically to a Dell laptop used by top Clinton aide Huma Abedin and her now-estranged husband, disgraced former New York Rep. Anthony Weiner. The documents, released thanks to a Freedom of Information Act (FOIA) request filed by Los Angeles-based attorney Randy Schoenberg, appear to show that Fox granted the warrant simply because they contained emails between Clinton and Abedin, messages that may have contained “evidence, contraband, fruits and/or items illegally possessed”—i.e. classified documents—based on the FBI’s earlier investigation of Clinton’s emails, which did contain classified material.

Comey recommended in July that no criminal charges be brought against Clinton or her State Department staff because investigators found no indication of intent or criminal negligence in their handling of classified material.

The FBI’s argument for obtaining the warrant, according to Schoenberg, was not enough to establish the “probable cause” needed to justify issuing it.

“I see nothing at all in the search warrant application that would give rise to probable cause, nothing that would make anyone suspect that there was anything on the laptop beyond what the FBI had already searched and determined not to be evidence of a crime, nothing to suggest that there would be anything other than routine correspondence between [Clinton and Abedin],” Schoenberg told USA Today.

Other attorneys agree. Speaking with the Huffington Post, Salmon P. Chase College of Law Professor Ken Katkin said, “This search warrant application appears to have been meritless. The FBI should not have sought it, and the magistrate judge should not have granted it.” He also said that the documents suggest “a belief that any email sent by Hillary Clinton from a private email server is probably evidence of a crime.”

If true, “then it must be seen as a partisan political act, rather than a legitimate law enforcement action.”

Clark Cunningham, Georgia State University’s W. Lee Burge chair in law and ethics, said the warrant appears to have been granted on “nothing more than mere speculation that there is classified info on the laptop,” and that it may violate the Fourth Amendment against unreasonable searches and seizures.

Not all legal experts are so sure the warrant crosses the constitutional line. Attorney Orin Kerr, writing in the Washington Post, says he believes it is “unclear” whether the FBI’s warrant affidavit established probable cause, partially because key portions of the documents are redacted. Further, Kerr writes, answering whether the FBI established probable cause “doesn’t answer whether the government violated the Fourth Amendment.”

“The documents released today give us a small window into the case,” Kerr concludes, “but they leave the most interesting questions unanswered.”